Susie Young cheers on runners as they cross the finish line in the 2014 MB 10K Run.

When runners take their mark Saturday morning, the Vin Scully of the Manhattan Beach 10K Run will be there once again, microphone in hand, offering verbal energy to spark their trek.

For Manhattan Beach resident Susie Young, announcing the race has become a tradition, and one many runners and fans look forward to each year. She, too, looks forward to the day, calling it "a fun sort of thing." 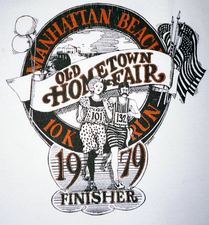 Indeed, Susie, who ran in the first race in 1978, has become a part of the race's history, masterfully amping, psyching, teasing, and cheering on runners – often by name – as they wind their way from start to finish.

For many race veterans and fans, Young's voice is as much a part of the experience of the Manhattan Beach 10K as Scully's voice is part of a Los Angeles Dodgers game.

Though she says she knows fewer runners as time passes, Susie still makes it her job to know as many as she can. On Friday, the effervescent grandmother spent the day at the in-person race registration, putting "faces with names."

For years, when her kids were younger, she knew three-fourths of the runners.

"I had four kids in Manhattan Beach schools," she says, "and they were in soccer, swimming, football. And I knew running people. You just knew people."

These days, she has a spotter who helps identify runners and takes assistance from onlookers and other 10K staffers.

"Even if I don't know a runner's name, I can say, 'Oh, we've got the first runner heading to the finish line. Let's make some noise for them.' Or, I can identify runners by what they're wearing, and say, 'Yeah, Mira Costa track team' as they cross the finish line.'

For the past week, she's been battling a bit of a cold, with friends coming to her aid, telling her she can't be sick and offering all sorts of remedies.

As one of the run's founders, Susie ran the first one, which went off without an announcer. Then, while running the Super Bowl Sunday 10K in Redondo Beach that January, she was tapped to be the event's announcer.

She's not sure why she got the job but says, "I probably talk the most or was the least shy" person in the group.

She fondly recalls the race's early years before online registration, when racers would line up outside Joslyn Center to register the first day, the line extending down Valley Drive past the tennis courts at Live Oak Park.

"It was a blast," she says. "It was like a social event. My kids would come and pass out fruit and drinks. We would be sitting around for hours."

That sense of community still makes the race what it is, with many of the original founders still involved, and a roster of some 60+ people who have participated in the race every year.

With the race's longevity, Susie has gained a number of fans who appreciate what she brings to the 10K. She recalls running into grateful racers at the grocery store who said hearing their name announced and cheers of support gave them extra energy at the end of the race. Many fans say hearing their name announced is their favorite part of the race.

"It's (the race and hearing their names announced) very old school," Susie says. "It's part of their growing up. That's their name, and they want to hear their name. It's like, 'This is my turn and somebody knows me.'"

It's no coincidence that the race is held to coincide with the two-day Hometown Fair. Race founders wanted to add to the community feel and spirit of the weekend.

The fair is known as a weekend that brings people back to the community they grew up or had fun in. Many high school classes hold reunions during the weekend, and hang out at the fair together. It's also a time for current community members to create their memories.

Mind you, if it's a runner Susie really knows, you might hear, "Oh my gosh! Did you stop at Uncle Bill's (Pancake House) for coffee?" as she razzes a friend about the amount of time it took them to finish.

For most runners, though, Young's voice will just be a fixture of the morning, and a notable part of the finish, whether they place in the first few minutes or come in near the end. More than one runner will cross the finish line with a sense of amazement: "Hey, she just called out my name!"
Sports & Rec Hometown Fair Manhattan Beach 10k run Manhattan Beach Hometown Fair Vin Scully Suzie Young