The new location of the Manhattan Beach Peace Pole, between 17th and 18th Streets on the Greenbelt.

The City of Manhattan Beach peace pole has been installed in a new permanent location on the Greenbelt, also known as Veterans Parkway, between 17th and 18th Streets.
Although Manhattan Beach City Council members had expressed a preference to move the peace pole to the veterans' memorial at 15th and Valley, the peace pole now stands in a more secluded spot.
On Thursday, November 11, the city will hold its 24th annual Veterans Day ceremony at the veterans' monument at 15th and Valley.
Those who wish to see the peace pole will need to walk approximately 1 1/2 blocks north of the veterans' monument, between 17th and 18th Streets, to where the pole has been installed on the Ardmore side of the Greenbelt in between several larger trees.
Nevertheless, Manhattan Beach Mayor Hildy Stern said she was pleased with the location.
"I am thrilled that this internationally recognized symbol of peace is permanently placed on Veterans Parkway," said Stern in a statement released by the city. "City Council's unanimous decision to install the peace pole on the Parkway serves to unite our community through its unifying message. I hope this peace pole will serve as a reminder of the immense power we all have, both individually and collectively, to make a difference in the world when peace is our guide."

At the October 5 City Council meeting, members voted, 5-0, to move the peace pole from Civic Center Plaza to Veterans Parkway. At the time, it appeared that councilmembers' intent was to move the pole to where the veterans' memorial sits at 15th and Valley - a public and visible location at what is generally a busy intersection.
At the meeting, Mayor Pro Tem Steve Napolitano said, "The comment was made before by Councilmember [Richard] Montgomery to place it over in Veterans Parkway, which I think could be very well appropriate, especially by our memorial out there. To put a peace pole next to a memorial to those who have sacrificed and served our country I think is appropriate, so I'm fine to put the peace pole over there."
"I agree with Mayor Pro Tem Napolitano, it seems right - putting it next to the war memorial makes it a perfect setting for it," said Councilmember Richard Montgomery at the meeting.
Several minutes later, as the motion was being made to move the pole to Veterans Parkway, Napolitano also said, "That's a proper place for it. Especially catty-corner to the 9/11 memorial [which is diagonally across the street on Valley]."
Reached by text on Wednesday evening, Montgomery told DigMB that he hadn't seen the new peace pole location yet, but he said that "North of the veterans' memorial is where I envisioned it would go."
Also reached on Wednesday evening, Stern told DigMB: "Council was not involved in identifying the exact location after the determination that it would be permanently placed on Veteran's Parkway."
On Thursday morning, city spokesperson Jessica Vincent told DigMB, "After walking Veterans Parkway, the location selected was deemed best suited for the peace pole due to the serenity of the area, which includes the adjacent stone benches and a large overgrown tree that provides shade for the seating area." 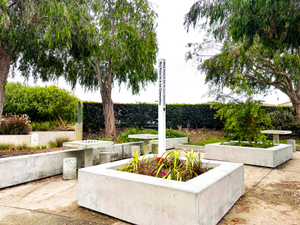 The peace pole was originally installed at Civic Center Plaza at Stern's request and dedicated at a small ceremony on September 9, as she began her term as mayor.

At the time of its installation, some councilmembers objected to a permanent installation, noting that the peace pole had not received proper vetting from the Cultural Arts Commission as per city policy. The council agreed to allow the peace pole to remain in place for one month. As of the October 5 meeting, the agreement was reached to move the pole to Veterans Parkway.

The pole is now permanently installed in the ground at its new home on the Greenbelt. It is flanked by several large stone benches that could serve as seating for those who wish to sit near it.

The Peace Pole Project was started in Japan by Masahisa Goi, who dedicated his life to spreading the message, “May Peace Prevail on Earth.” After Goi authored the Universal Peace Message in 1955, his vision and activities to spread the Peace Message began growing in popularity.

Manhattan Beach's peace pole is now one of over 200,000 peace poles standing in almost every country throughout the world, including at the Pentagon, Ground Zero in New York City, The Hague in the Netherlands, Khyber Pass in Pakistan, the Great Pyramids of Giza, and in the Himalayan mountains in Nepal.

According to a press release from the city, the Manhattan Beach peace pole is expected to serve as a gathering location each year on September 21 for the community to recognize and observe the International Day of Peace.