Reggie Kenner's sense of humor, his dedication to worthy causes, and most importantly, his toffee, have kept him in high demand during the holiday season. 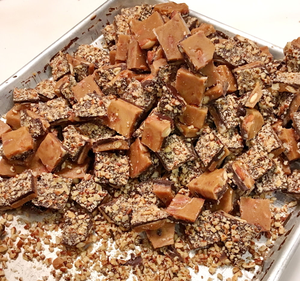 Kenner runs the popular Reggie's Welsh Toffee operation out of his home in Manhattan Beach. (His toffee is made from a layer of butterscotch, cooked to candy-like hard crack stage, then topped with chocolate and chopped pecans.)  He has tons of colorful stories and he donates all earnings above ingredients and shipping costs to charity. But it's the toffee - plain and simple - that keeps people coming back.
"I've got people in Texas who order a total of 25 pounds around Christmas gifting time," said Kenner. "I've mailed to Hawaii...My wipe-off board has orders for about 40 pounds right now."
Yet when asked if he could be considered as having a "cult following," he responded in true self-deprecating fashion: "It has sort of a cult following, and I appreciate it, but more on an 'I can always use compliments to soothe my insecurities' level."

A Toffee Maker is Born

Kenner, a retired locomotive engineer, came into toffee-making later in life. The story of how the toffee came about is best told in his own words (as told to DigMB):
"My sister Rhonda was a corrections officer at the prison in Tehachapi. She says she got the recipe for toffee from her ex-husband's relative in Barstow... I've read so many toffee recipes online and tried toffee from farmer's markets and the Hometown Fair but nothing was close to Rhonda's version. I was forbidden to ever share the recipe but I'll admit, between us, that I've written it out to one dental assistant and one former girlfriend. I also gave the young woman at the farmer's market on Jack London Square in Oakland a hint about how to make her toffee better. Don't tell Rhonda.

"[Rhonda] started making large trays of toffee and would enlist me in the process. The large trays would make about seven pounds apiece and we would turn out, maybe, seven in a day. It's not a long process per tray, but with two working, one could cool, be scored and covered with chocolate and pecans before popping into the refrigerator, as another pot was being caramelized .

"She used Hershey's milk chocolate. I LOVED the stuff she made. She would give me big Mason jars full and I'd have to put it in the freezer so it was out of sight or, whenever I passed the refrigerator, I'd have to take at least two pieces out and eat them...She used to sell her toffee to other officers at the prison who named it "crack". Appropriate for sure. 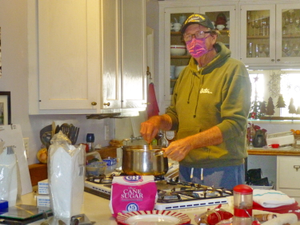 "She would let me help because she knew I could never remember the recipe. It was not the ingredients; those are the same in almost every toffee recipe I've seen. It was the method of cooking.

"I became pretty good at making the stuff after my sister shared the tricks with me and, through repetition, I got it down. Not that I don't toss a tray out from time to time, but I pretty much have it now."

However, Kenner made one key change to the recipe: "My wife, an incredible cook and much more worldly than myself in flavors, suggested that I try dark chocolate instead of milk chocolate. We tested a batch, and she was right. I tried a few different brands and found a delicious one at a very reasonable cost.”

So why is the toffee "Welsh" and not, say, "English"? According to Kenner, "My golf pal is from Wales, and still has a house there, which we’ve visited. He insists that everything is better if it’s Welsh."

All Profits to Charity

One key difference in Kenner's toffee-making shop is that it's not a for-profit operation. He donates all profits above the cost of ingredients and shipping to charity. (Buyers pay for shipping, but most local orders he delivers for free - This week he is delivering an order as far as Huntington Beach.)

The nonprofits that he has chosen mostly help with childrens' needs and food insecurity, such as No Kid Hungry, World Central Kitchen, Feeding America, and Project Angel Food. Kenner said he chose these causes to honor his father, who grew up extremely poor on a farm in Missouri. Later in life, his father gave generously to many nonprofits, especially those benefiting children.

"My dad and I are much the same in thinking that helping kids is the best," he said. "Kids are not responsible for their circumstances in life, and they are incredibly resilient. Judging from the mail I continue to receive in his name - he’s been gone since 2014 - he must have donated $20 to every kid-based charity. Project Smile, St Labre Indian School, even Boy’s Town. I thought that was just a movie with Mickey Rooney."

Kenner continued, "He helped everyone who asked or who appeared to need help...I guess I still strive to be more like him and to make him and my mom proud. Donating money to worthy causes seems a good way to do so, and if people get a product of which I'm very proud, all the better."

His toffee-making operation has helped him donate as much as $3600 in a year to his favorite causes.

Kenner hasn't done much in terms of advertising and promotion, given that he's basically a one-man operation. But he's found that once people try his toffee, they're immediate converts.
"What makes my toffee stand out? It's the flavor," he said.
He gave the following example of what can happen when someone tries his toffee for the first time (again, best told in his own words):
"I went to a Super Bowl party in Bakersfield several years ago and took a few boxes of freshly made toffee with me. I'd not named it at that point but I made it from time to time for friends and neighbors who, with no urging from me and not knowing my sister, started calling it "crack" just as the correctional officers had.

"Anyway...Alicia, the hostess, put some nice glass containers about with my toffee in them. I was in another room when someone asked loudly, 'WHERE DID THIS CANDY COME FROM!?'

"I went in the room and admitted guilt. The guy raved about it and said, 'You should run it by that woman in the other room. She's worked at See's Candy for about 15 years.'

"I took some in and asked the woman to try it and let me know if it was as good as See's. She had a piece...then another, and said, 'Honey...See's doesn't have ANYTHING this good.'"

Kenner has also posted some more dubious "raves" about the toffee on his web site, including the following:
So does he have fans in Wales? 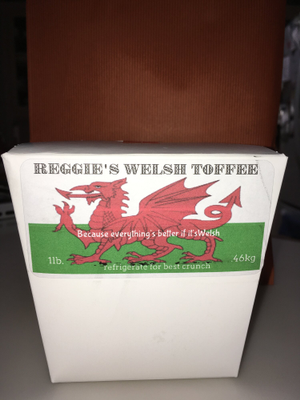 "I got an email this year from a woman who runs a small store in Wales that sells only products made in Wales," said Kenner. "She asked if I might consider putting some Reggie's Welsh Toffee in her shop. Sadly, I had to admit to her that I was not Welsh, although we have spent time there. I offered to send her a small box at no expense just so she could wish I were Welsh. Didn't hear back."