Ella's Enchanted Garden - a fancifully decorated East Manhattan Beach garden that attracts kids and families - seems like the perfect place to collect toy donations during the holidays. That's why - even after a Grinch stole donations from the front of the house - the toy drive is continuing.
Diana Orr, whose mother is 95-year-old Ella of Ella's Enchanted Garden, said that her family has been collecting toy donations outside their house for the Spark of Love toy drive. Several donation boxes sit outside the house at 11th and Meadows during the daytime (the bins come inside at night).
But then on Friday at around 2:00 p.m., someone stole "a lot of the best" toys from the donation box, said Orr.
Orr noted that there is is a doorbell camera at the house, but the person approached the front of the house in such a way to elude the camera. Orr has one screen shot of the toys being in the bin, and another shot with the toys gone.
Nevertheless, Orr has decided to continue the toy drive - and the donations are continuing to come in. As of Sunday, there were three bins full of toys. (There is also a sign that reads "WAAA! Please return the stolen Christmas toys. They are for the poor children that do not have enough money to buy toys and presents.")
Orr said that while the Spark of Love toy drive only lasts until December 15, her family will donate any toys they receive between December 15 and Christmas Day to a local women's shelter such as Beacon Light Mission.
She added that she was hoping that seeing people bring toy donations for the toy drive would brighten her mother's day. Ella turns 96 on December 23. 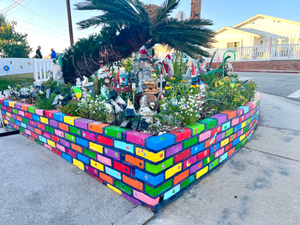 Ella's Enchanted Garden, located at the Southwest corner of 11th and Meadows, is a colorful and ever-changing display of gnomes, animals, and other figurines.
A bin of free oranges currently sits outside in the center garden, and free goodies and doggie treats can be found alongside the house.
The family started the garden in 2016, said Orr, and it continues to attract many children and families throughout the year from the immediate neighborhood and beyond.
Ella's Enchanted Garden and Toy Drive [4 Images] Click Any Image To Expand