Camille Jorenby of Manhattan Beach, part of an inaugural class of female Eagle Scouts, has been selected to participate in the Rose Parade's Tournament of Roses Scout Troop.
The Tournament of Roses Scout Troop is made up of selected Eagle Scouts from the Greater Los Angeles Area Council and selected Gold Award Girl Scouts (Girl Scouts) from the Girl Scouts of Greater Los Angeles . These scouts lead the opening Flag Ceremony and carry the banners announcing the award-winning float entries in the annual parade. 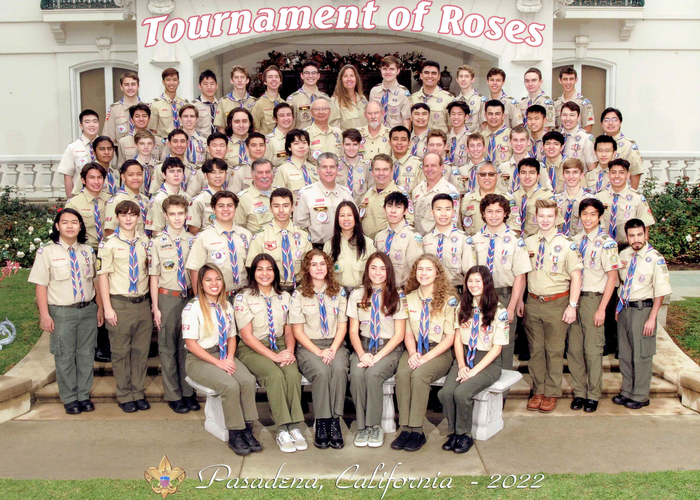 Jorenby (first row, second from right in the photo above) is one of six female Eagle Scouts to be chosen for the honor.
"I feel extremely honored and proud to walk in the parade, and I am thrilled to help represent scouting, female scouts in the BSA, and the South Bay," Jorenby told DigMB. "Throughout my project I received support from the community, adult mentors, and friends, which was crucial to my success."
Jorenby, a junior at Mira Costa High School, became an Eagle Scout in February 2021. For her Eagle Scout project, she painted and personalized all the pillars of the Mira Costa parking lot at the corner of Peck Avenue and Artesia Blvd.
The Eagle Scout award is the highest level of achievement in scouting through BSA (Boy Scouts of America, which now includes both boys and girls). Since 1912, the Eagle Scout rank has represented a milestone of accomplishment that is recognized across the country and even the world. Those who have earned the Eagle Scout rank count it among their most treasured achievements.
Part of the process of becoming an Eagle Scout involves planning, developing, and giving leadership to others in a service project that is helpful to a religious institution, school, or the community.
The BSA organization formally began letting girls join as scouts on Feb. 1, 2019. The inaugural class of female Eagle Scouts, including Jorenby, was recognized in February 2021.
MB People