The Manhattan Beach City Council on Thursday night approved the language and style for a new plaque honoring Bruce's Beach to replace the existing plaque at Bruce's Beach Park.
As approved by City Council, the new plaque will reflect language that was drafted by Mayor Pro Tem Steve Napolitano and edited with contributions from all members of council. It will be inscribed in bronze, similar to the existing plaque at the park.
The new plaque language will read as follows (subject to final review by a grammarian/ proofreader):
After being turned away from other coastal cities, Willa and Charles Bruce purchased property along the Strand in Manhattan Beach to create a beach resort for the area’s Black community on February 19, 1912. By 1916, the resort known as “Bruce’s Beach” was a thriving fixture for visiting Blacks, with a restaurant, dancehall, changing rooms, and showers.

Unfortunately, not everyone in Manhattan Beach welcomed the Bruces’ enterprise and its crowds of Black patrons in that era of Jim Crow and racial segregation.

The Bruces, their patrons, and the other Black property owners in the area faced harassment, intimidation, and discrimination by some, including City Hall. The purpose of these actions was to make Manhattan Beach inhospitable to Black residents and visitors.

Enough White residents ultimately pressured the City Council to exercise its power of eminent domain to acquire the land for use as a public park. The City condemned the properties of the Bruces, Prioleaus, Johnsons, Patterson, and Sanders. Twenty-five White-owned properties that sat undeveloped among the Black-owned properties were condemned as well.

The City’s action at the time was racially motivated and wrong. Today, the City acknowledges, empathizes, and condemns those past actions. We are not the Manhattan Beach of one hundred years ago. We reject racism, hate, intolerance, and exclusion.

This park is named in memory of Bruce’s Beach and in recognition of Manhattan Beach’s next one hundred years as a city of respect and inclusion. 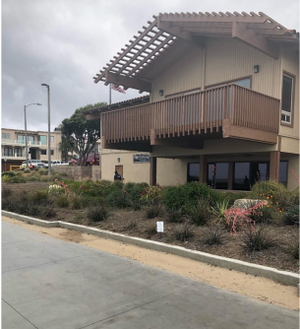 Isela Gracian, a staff member for County Supervisor Holly Mitchell (Manhattan Beach's new county supervisor) told City Council members on Wednesday that the County's plaque would be a 4x8 foot display in front of the L.A. County Lifeguard Headquarters between 26th and 27th Streets, facing the Strand.
City officials are presuming (although Gracian was not immediately able to confirm) that the Los Angeles County plaque will take language directly from the Bruce's Beach history report.
The city now plans to install just the one plaque at Bruce's Beach Park. Once the design is determined - and it is confirmed to meet ADA accessibility requirements - it will come back for final review before the council.

Plaque Language Had Been Hotly Contested

The question of what to include on a new plaque - and whether to have one at all - has been hotly contested ever since Bruce's Beach re-emerged in the public consciousness in 2020.
City-wide, there has been tension between two factions. One has been calling for "telling the whole story" by demonstrating that the city had racist motivations in displacing the Bruces and other African American families at the time. The other side has argued that the Bruces were fairly compensated for their land, and has resisted what they see as efforts to portray the city as racist.
Last June, City Council members adopted the language of the Bruces' Beach history report, as provided by its History Advisory Committee. But councilmembers questioned using the language proposed for the plaques, even though it had been taken from the report it adopted, and instead sent it back to the History Advisory Committee for further revisions. At a follow-up meeting in November, the council again could not agree on the history panel's recommendations, and subsequently opted to do its own review of the language.
Commenters at Wednesday night's meeting once again reflected divided opinions. A few commenters argued that the city's plaque should be on the East side of the Strand facing the lifeguard station, which would more accurately reflect the location of the original Bruce's Beach property.  Others said that Manhattan Beach should not need to create a plaque at all, now that the county is creating one.
Councilmember Suzanne Hadley noted that it would be prudent to wait to see what the county's proposed language would be, rather than having to start over again if the city's plaque language conflicted with what was on the county's plaque.
"I don’t want to spend the money just to rip it up and start all over again," said Hadley.
But Mayor Hildy Stern argued that the timing - and location - for the plaque was correct. "This is the right time. We are finally here, ready to work on this, to come out with accurate history that we can show in this park - in this spot - that really tells the history of how acts of racism really affected and tried to run these black business owners out of Manhattan Beach," she said.
Councilmembers voted 5-0 in support of the language, with Councilmembers Joe Franklin and Suzanne Hadley indicating their approval was contingent on where the plaque would be located.
The council then voted 3-2 to keep the memorial in Bruce's Beach park (with Hadley and Franklin as the 'No" vote, indicating that they thought it should go on the Strand facing the original Bruce's Beach Resort property).
Finally, councilmembers voted 3-2 to allocate $20,000 from the city's Public Art Trust Fund to support the project. Once again, Hadley and Franklin were the "no" votes.
(The Public Art Trust Fund was created through a dedicated 1% fee charged to developers that does not impact the General Fund. All city art projects are funded through the Public Art Trust Fund.)

Since 2020, the city has engaged in an emotional debate over how - or how much - to recognize Willa and Charles Bruce, pioneering Black business owners who created a thriving resort for Black beach-goers in Manhattan Beach in the 1920s.

By the end of the 1920s, with pressure from community members who did not want Black beachgoers in town, Manhattan Beach's Board of Trustees (a precursor to the modern city council) claimed the land under eminent domain and displaced the Bruce family as well as other families who had settled in the area. The land was acquired by the state of California in 1948, and was transferred to L.A. County in 1995. The beachfront property the Bruce family once owned is now the site of the Los Angeles County Lifeguard Training Headquarters.

An effort led by Los Angeles County leaders to return the land to the Bruce family culminated in September 2021 when California Governor Gavin Newsom signed SB 796, a bill to return the county-owned beachfront property to the Bruce family, into law.
While there are many legal hurdles remaining, the Los Angeles County Board of Supervisors has approved a plan that they say will iron out those challenges. One potential outcome would be for the Bruce family to lease back the land to the county so that it could maintain current lifeguard operations on the site.

Meanwhile, it was not until 2006 that the city of Manhattan Beach publicly acknowledged this chapter of its history by naming the area east of the beachfront property Bruce's Beach Park and establishing a plaque in that location. In the summer of 2020, a movement began growing for the city to take further action to recognize the Bruces.
Despite creating a Bruce's Beach Task Force and adopting a history report created by the task force, the Manhattan Beach City Council has struggled for nearly a year with finding compromise on the wording, location, and style for a new marker honoring Bruce's Beach and the Bruce family.