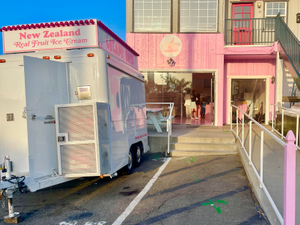 Known for their popular ice cream truck, the Creamy Boys team is now serving up ice cream daily from 11:00 a.m. to 10:00 p.m. at the former Rinaldi's location in Goat Hill Plaza.

"We are stoked to have the shop open and we are enjoying meeting more Manhattan Beach locals every day," said Creamy Boys owner Duncan Parsons.
Noting that the lease is just until September, Parsons added, "Our goal is that the store is successful enough that we save enough money to build another location near our current spot later on this year."

What is New Zealand fruit ice cream? It's a style of ice cream where a vanilla base is blended on the spot with the customer's choice of fruit. As it goes through the blender, the ice cream softens to a super-smooth consistency similar to (but richer and more flavorful than) soft-serve ice cream. 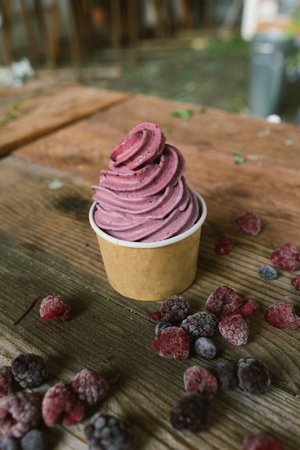 But the real show-stopper is the Hokey Pokey, a honeycomb-toffee flavor that Parsons described as a "Kiwi classic." It's a delicious caramel-like blend served with just a sprinkle of crunchy toffee.
And for any flavor, customers can choose whether they want regular or vegan ice cream.
Creamy Boys is also looking at expanding its menu options now that they have a bigger kitchen. Beyond the classic fruit ice cream, Parsons said that the team hopes to add milkshakes, and possibly even  pavlovas for "dessert bowls" made with ice cream, fresh whipped cream, and berries.

How did Creamy Boys come about?
Parsons is from a rural area of New Zealand and grew up on an apple orchard and around lots of fruit and berry farms, where it was common to find "real fruit ice cream."
"It is super delicious and refreshing, and we'd get it all the time after school," he said. 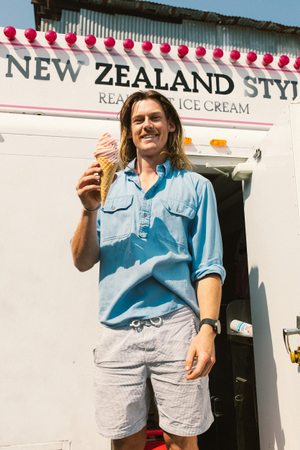 Parsons moved to North Carolina a few years ago for an undergraduate degree at Duke, and afterward moved to Los Angeles to build a trailer to sell real fruit ice cream ("much to my dad's disbelief").

He started building in March 2020 just as the pandemic started, and about a year later he had the trailer finished, permitted and was on the road around L.A. making ice cream.
He then built another trailer in the second half of last year, and linked up with three brothers (fellow Kiwis) who are in Los Angeles for their band, Emperors Night.
"The four of us have been the core team - they are all amazing guys - since late last year, and we have been working really hard to save up to build a store, which we built out mostly ourselves early this year," said Parsons.
And what about the name? "My friend Joe and I were on the phone discussing the idea of trying to sell real fruit ice cream in California. We thought of Creamy Boys and had a laugh." said Parsons. "Then when I mentioned it to my friends here they cracked up, so it stuck immediately."

Making a Home in Manhattan Beach 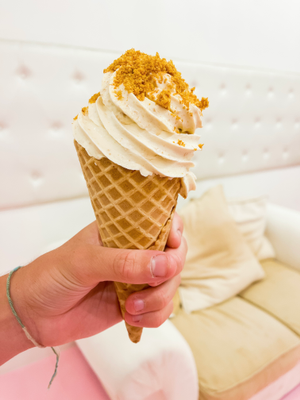 "I got in touch with him because he was a fellow Kiwi, and later let him know that I was looking for a space to make ice cream and operate the trailers out of," said Parsons. "He suggested we take this short-term lease at Goat Hill, which we only have until September, and try our hand at a brick-and-mortar. I had no expectation of running a store this soon, but I figured we could have a crack, and if we built it ourselves it would be affordable enough that it wouldn't be too risky."

The new location is bright pink, in keeping with Creamy Boys' logo. (Two bottles of Pepto Bismol behind the counter are part of the team's running joke about the pink color.)
In the front of the shop is a large open space where Emperors Night has set up a few musical instruments, and where the crew anticipates there will be musical performances throughout the summer.
There's also a record player, but at the moment Creamy Boys only has two records (The Righteous Brothers' Greatest Hits and The Rolling Stones' Let It Bleed). The team will gladly accept record donations.
Creamy Boys is located at 350 N. Sepulveda Blvd., Suite 1, in Manhattan Beach. They are open from 11:00 a.m. to 10:00 p.m. daily.