Update: As of mid-May, the last resident to celebrate a birthday with the balloon has managed to re-inflate it so it is back to its original glory and still going strong.
At a time when Manhattan Beach residents are divided over a number of different issues, there's at least one thing unexpectedly bringing people together: a jaunty, multi-tiered Mylar birthday balloon. 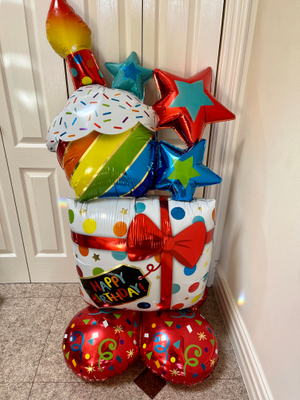 The balloon was first purchased in January, but has since traded hands multiple times all across town as residents exchange it on the Manhattan Beach Buy Nothing board, a community bulletin board that lets residents give or take things for free.

As the cheerful four-foot balloon enters its fifth month of life, it has celebrated at least 11 birthdays across Manhattan Beach, with more residents waiting in line.
And what started as a single "give" has stretched out into multiple exchanges that has even created new friendships among neighbors.

The balloon first appeared on the scene in January when Manhattan Beach resident Megan Zimmer's husband bought it for her birthday (see lead photo above).
"My husband surprised me with the large balloon display on my birthday. It was there when I got home from work," said Zimmer. "His birthday was in February, so we kept it around and displayed it again for his birthday."
But after that, the balloon (which is a regular balloon, not a helium balloon) still had plenty of "life" left in it, and Zimmer didn't want to just toss it.
"The balloon was still so full and so cool I couldn't think to throw it away," she said. "I had heard about the Buy Nothing Group, so I searched for it on Facebook and joined the group. This was my first "Buy Nothing" post. The post received a lot of attention and many people were interested."

The Manhattan Beach Buy Nothing group is a Facebook group in which people post things that  willing to give away for free (or requests for something they need).
It is based on the Buy Nothing Project, which describes itself as the "world's biggest gift economy."  The Buy Nothing Project was founded in 2013 with the mission to build community by connecting people through hyper-local gifting, and reducing individual impact on the environment.
The local Manhattan Beach chapter, which is run through Facebook, has more than 1,500 members. On any given day, there may be items up for offer ranging from antiques to zucchini,  from bricks of tofu to actual bricks.
When Zimmer posted the balloon, she received a great deal of interest. (After all, doesn't everyone know someone with a birthday on any given week?). 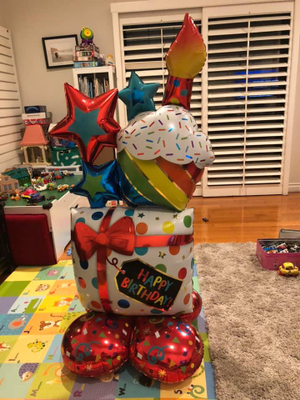 But she credited resident Heather Kim (who used it for one of her children's birthdays in early April) with the idea to keep it moving across town.

"I really wanted that wonderful balloon to make its way to as many Manhattan Beach birthdays as possible. I was hoping it would come back to my family five more times," said Kim. "It reminds me of Flat Stanley, only it's a huge balloon... And yes, if you know me, I don't waste anything."
Added Zimmer, "When I saw it posted recently, I was thrilled to see that it was still going strong."

Balloon Introduces Neighbors to Each Other

In late April, after celebrating multiple birthdays, the balloon was up for offer again. [Full disclosure: The Manhattan Beach News family was one of the households to celebrate with the balloon.] This time residents Melissa Farr and Raquel Camassa both responded with interest. 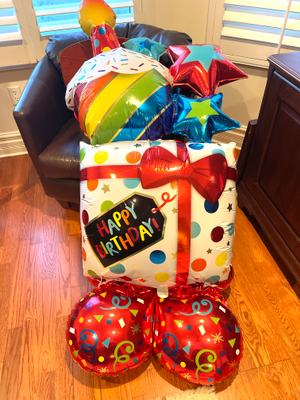 Farr took the balloon first and offered to drop it off at Camassa's house later - only to learn when they messaged each other that Camassa lived just a few doors down from her.

"We did meet through the balloon," laughed Farr, who added that she has two more people lined up for the balloon, and Camassa will take on the list from there.
Several people on the board have since spoken up for May and even June birthdays, presuming the balloon lives that long. (It is a little saggier than when it was first purchased.)
But now that it's become a Manhattan Beach Buy Nothing success story, it's unlikely that anyone will dare throw it out.
"I love this story...This is the reason behind this wonderful group," said Camassa.
MB Voices