Manhattan Beach Firefighters Save Family - For The Second Time Last week, Manhattan Beach firefighters battled a fire for hours to save the Barra family home in East Manhattan Beach. As it turns out, it was not the first time the MBFD has "saved" the Barra family.
In May 2020, Chris Barra was driving at 15th and Manhattan Ave. when he went into sudden cardiac arrest, fell unconscious, and crashed his car. He survived, in part due to immediate action by a Manhattan Beach police officer and the Manhattan Beach Fire Department paramedics.
"The fire department really did their thing. This is the second time they have saved my family," said Chris's wife Lory Barra, who was home alone with her children at the time of last week's fire. "The guys that saved Chris's life; they were the same ones that saved me."

Fire Started In the Kitchen, Spread Through a Vent

The August 12 fire at the Barra house started shortly after 10:00 p.m. Lory Barra was upstairs with her children while Chris - an Army Ranger and Brigadier General in the Army Reserve - was out of town on military duty.
Lory said she heard "some sort of pop or crash" downstairs, and when she went down to investigate, she saw flames rolling up her kitchen cabinet. She grabbed a fire extinguisher, but it didn't work.
She then rounded up her children and pets, while her son dialed 911, and piled everyone in the car and drove to safety down the street.
Firefighters worked on the house for about two hours, and the fire at first appeared to be out, but firefighters then discovered that the fire had gone through an HVAC vent and traveled up through the house all the way to the attic.
"The fire had extended up the HVAC and was burning inside the walls," confirmed MBFD acting battalion chief Kevin Tiscareno. Tiscareno noted that opening up the walls requires "a lot of manual work" and in this case, with plywood covering the walls, firefighters needed to use a chainsaw to get at the fire.
All told, Tiscareno said, it took approximately three to four hours to completely extinguish the fire. Automatic aid assistance was provided by the Los Angeles County Fire Department, the El Segundo Fire Department, and the Redondo Beach Fire Department. There were no injuries, he added.
The cause of the fire is still under investigation.
"They literally saved my house," said Lory Barra. "They definitely kept it from burning to the ground."

Barra estimated that with all of the damage, it will be about a year before the family can move back into the house.
She added that - much like in 2020 after her husband's heart attack - she has been overwhelmed with the response from the community.
"Of course our wonderful community again is reaching out to help me," she said, "But quite honestly we are traumatized, but we are safe, and we are well fed."
Barra continued: "I would like to ask people not to do anything for me, but to thank our fire department for what they do." 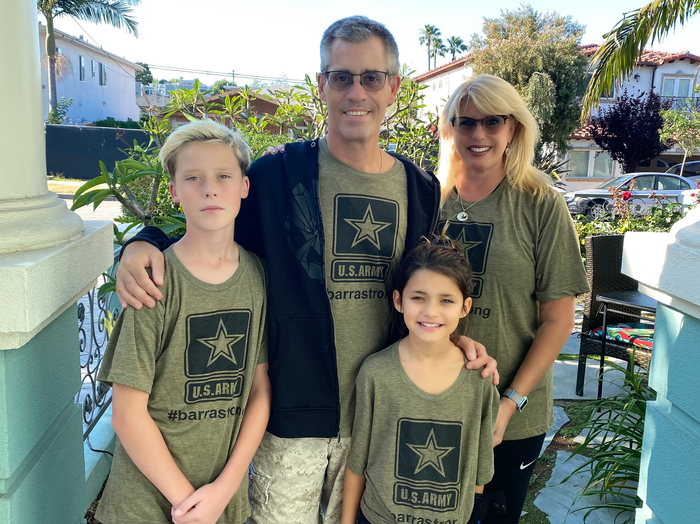 Tiscareno said that the fire was a good reminder for families to keep their smoke detectors in working order, and to have an exit plan for all family members to escape in case of fire.

(To read another story about a family's chance second encounter with the Manhattan Beach Fire Department, click here.)