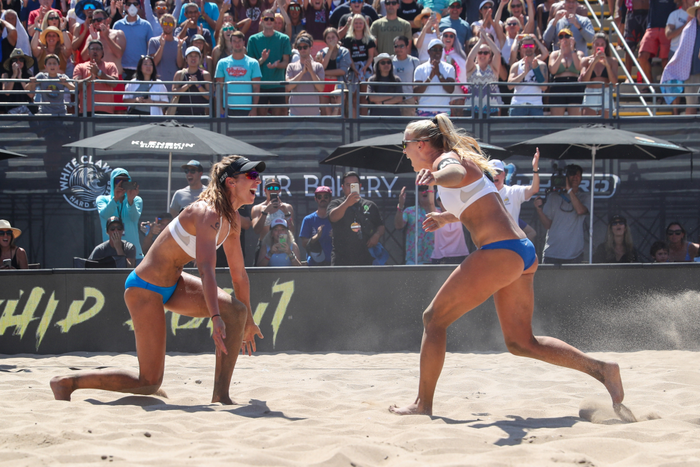 Hughes and Kolinske - Photo via AVP.

On the men’s side, second-seeded Bourne and Crabb defended their Manhattan Beach Open title, as Crabb won the tournament for a third straight playing and Bourne won his second consecutive MBO. 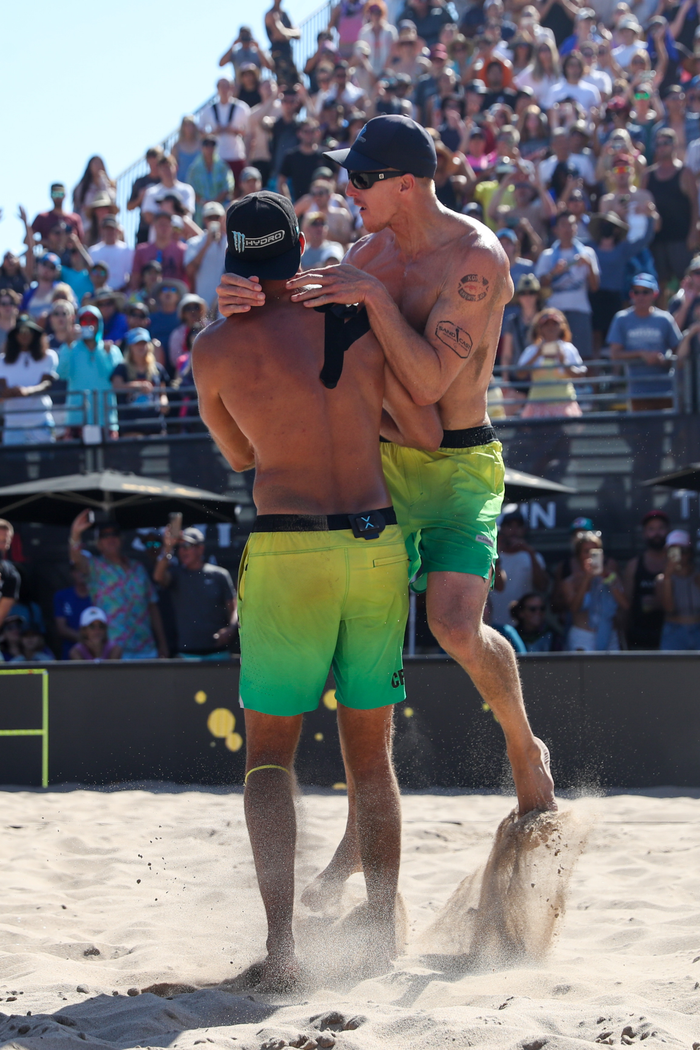 Bourne and Crabb. Photo via AVP.
For Hughes and Kolinske, the women’s final was an opportunity to get revenge on thirird-seeded Kelly Cheng and Betsi Flint, who knocked them into the contenders’ bracket in a fourth-round sweep Saturday afternoon.
While Cheng and Flint were the statistical favorites, going undefeated all tournament and boasting three of three wins against this duo, Hughes and Kolinske were the crowd favorites and relied on the energy of their friends, families and fans to pull out a 21-18, 11-21, 15-13 win in the women’s final.
“I think the fans see how hard we’re working. We are grinding. We are never giving up. We are working with our trainer. We’re working with our coach, Evie (Matthews), on all the little things,” explained Hughes. “I really truly believe that [the fans] see that and appreciate that.”
The men’s final was an exact replica of the Fort Lauderdale Open final matchup, featuring Bourne and Crabb across the net from top-seeded Brunner and Schalk. While Bourne and Crabb swept the number one seed in straight sets along the Atlantic, they had to battle through a third set here on Pacific sand.
Although Bourne and Crabb struggled to make it into the finals earlier this season, they found their groove and have secured AVP victories from coast to coast. Sunday, they cruised to a 21-17, 21-14 victory in the men’s final.
Crabb became the first male player to win the Manhattan Beach Open three straight times since Olympic gold medalists Phil Dalhausser and Todd Rogers did it as a pair from 2006-08.
The AVP Gold Series Manhattan Beach Open ran Thursday through Sunday and featured 32 men’s and 32 women’s teams competing in the main draw for a $300,000 purse, tied for the largest of the season. 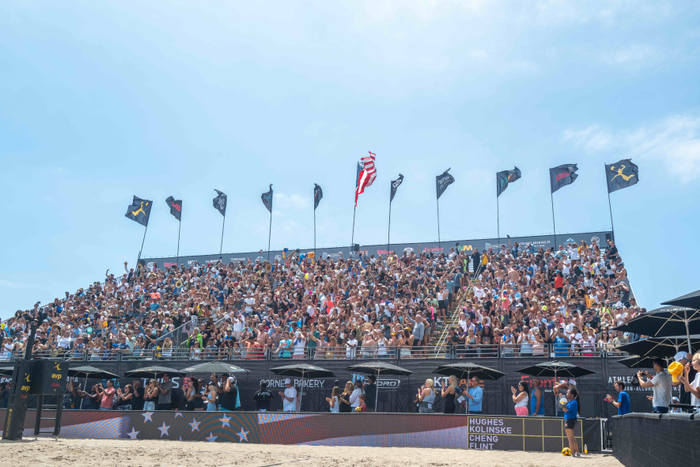 It was the tenth event in a 2022 AVP schedule that includes 16 tournaments in 12 states across the country and offers $2 million in prize money – the most comprehensive tournament slate for the AVP since 2009.
The tour now heads to "Neptune City" (a.k.a. Virginia Beach) for the AVP Tour Series Virginia Beach Open.
Complete brackets for both the men’s and women’s draw can be viewed here.