The coyote issue dominated discussion at Tuesday night's Manhattan Beach City Council meeting, with a divide between those calling for more education to prevent coyote intrusions, and those calling for lethal control through trapping.
The council concluded the issue by directing staff to draft an official city coyote management plan.
Staff will come back with an agenda item tentatively set to come before the City Council on October 4.
In the meantime, councilmembers appeared to be divided on if and when to begin trapping.
While wildlife experts have told the council that trapping is not a solution to the coyote presence in town, those residents who have been traumatized by the death of a pet or other animals have insisted that it's time to start eliminating coyotes by lethal means.
So far this year, the city has recorded 24 coyote sightings, 2 confirmed predations (killing of animals by coyotes), and 10 unconfirmed predations (meaning that the city was unable to determine if it was a coyote that caused an animal's death).
That compares with 28 reported coyote sightings for the year of 2021, with zero confirmed predations and 2 unconfirmed predations.

"To Change Their Behavior, We Have to Change Our Own"

At Tuesday's meeting, the council heard a report from Rebecca Dmytryk of Humane Wildlife Control Inc., who conducted a field study of coyote activity in Manhattan Beach at the end of July.
Dmytryk reported that the South Bay is home to the California valley coyote, which can typically weigh between 20 and 35 pounds, or about as big as a medium-sized dog, with long legs.
Dmytryk cited research showing that there have been dramatic reductions in coyote traffic in communities that remove food resources including pet food, birdseed,
compost, accessible garbage, fruits and berries, free-roaming chickens, and free-roaming cats.
She also referred to a study showing that Torrance's efforts to reduce the coyote population by lethal means has not resulted in a significant decrease in the coyote population - and might have actually been counterproductive as new coyotes took up the space and moved in. (Torrance reported more coyote sightings the year after it started trapping - 293 sightings and 11 coyotes trapped in 2020/21, versus 259 sightings and 15 trappings in 2019/20.) 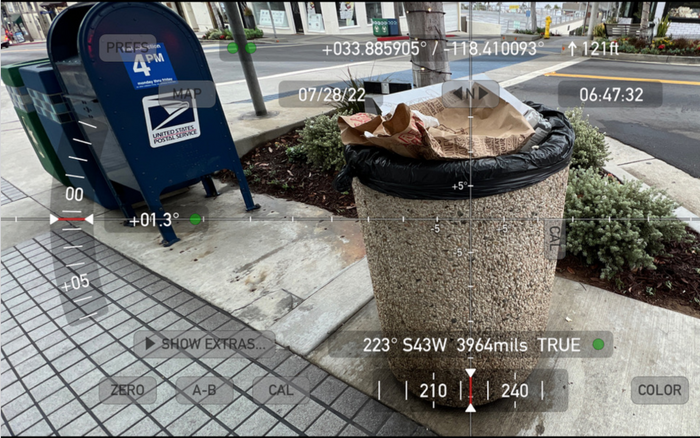 Exposed trash in Manhattan Beach. Photo via Dmytryk report.
Dmytryk's recommendations were to for the city to reduce attractants such as litter and food waste that is accessible through open trash cans, prohibit feeding of wildlife, adopt a feral cat management program, and build on the city's existing strategy of education. 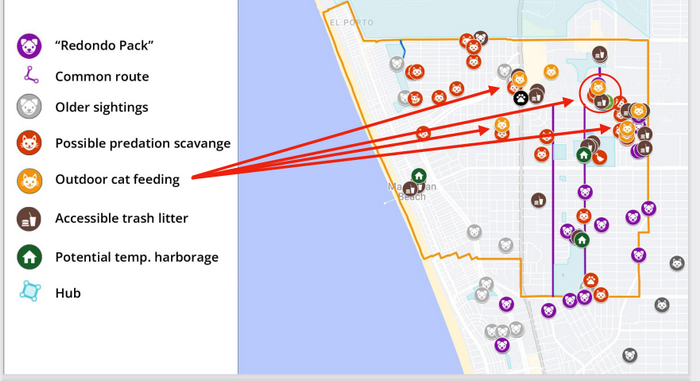 She recommended against any kind of lethal controls, adding that lethal controls should only be considered if a coyote was seen to be aggressive to humans. (The single coyote they encountered in their research was "extremely skittish.")
"We absolutely can reduce the presence of coyotes in Manhattan Beach, but to change their behavior, we have to change our own," she told the council. "It’s the people of this town who will ultimately draw coyotes out by not drawing them in."

Acting Captain Andy Harrod of the Manhattan Beach Police Department told the council that officers had identified several coyote "hot spots" around town, including one by Sand Dune park, one by Liberty Village near Polliwog Park, and one that may be developing by Mira Costa High School now that students are back in school (and leaving food trash behind).
Near those hot spots, he said, the department has distributed more than 1,000 door hangers with information about deterring coyote behavior, as part of an ongoing education campaign.
But some on council were not convinced that educational messages alone were enough.
"My biggest disappointment [in this effort] is a lot of resident blaming, which we don't do with Neighborhood Watch about crime," said Councilmember Suzanne Hadley. "We don't name-blame and shame the residents when criminals come to town and find an unlocked car."
Hadley said that the city needed to step up against coyotes with police as the "apex predator" to contain them.
Councilmember Joe Franklin added that no matter what, the safety of residents had to be the first priority. "I am more of a 'resident and child activist' than a 'coyote activist.'" he said.
Mayor Steve Napolitano pointed out that he had lived in Manhattan Beach for 56 years, and the issue of open trash cans and feral cats has always been around, but the coyote activity was something new in the last few years.
Nevertheless, Napolitano called for the city to continue its education program and  "sew up loose ends," including securing garbage and addressing the feral cat problem, for another six months to see if that makes a difference. "If we have more killing, then I'll be ready to trap," he said.
A coyote plan will come up for a vote before council next month. Meanwhile, the city of Manhattan Beach has a full page of resources on coyotes available here.