Manhattan Beach is a lovely place to visit with a beautiful sandy beach, but in October, thousands of people are drawn to this small town for its... pumpkin race?
That's right; it's a hotly contested race that sees hundreds of pumpkins speeding downhill toward the ocean, mounted on wheels held together by two axles. (In 2022, the World Famous Pumpkin Race will be held on Sunday, October 30. The pre-race festival starts at noon, and the race heats begin at 2:00 p.m.) 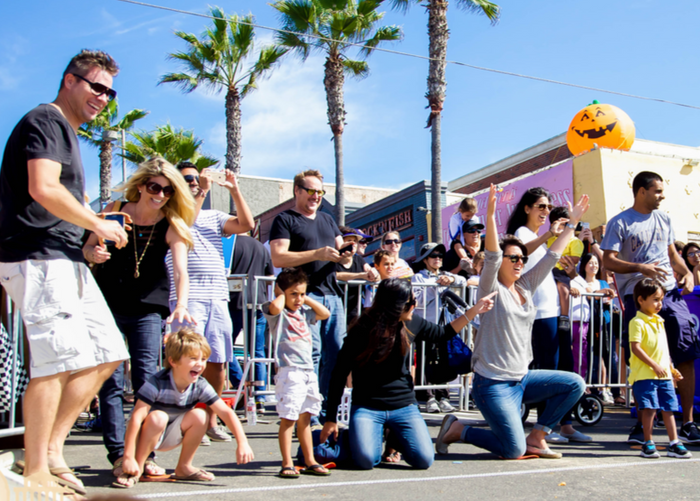 There are multiple heats, referees, crowds of spectators, and every year there's at least one "cheater." (That would be a watermelon disguised as a pumpkin, which, once discovered, the referees gleefully bash with the "Hammer O' Justice.") 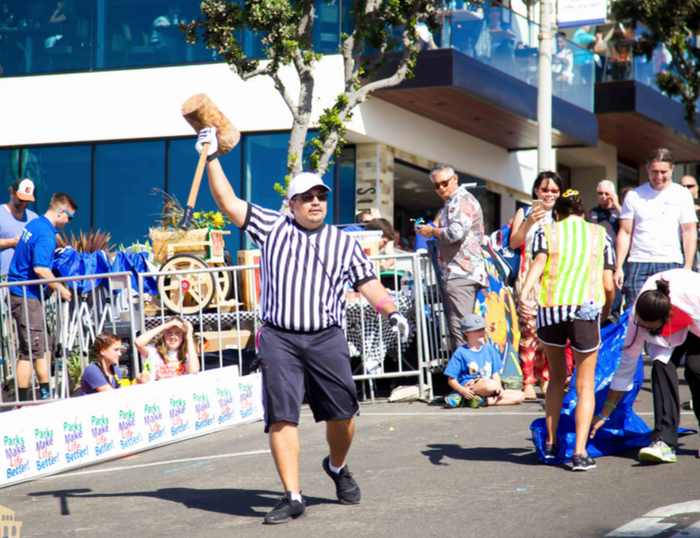 However, the winning pumpkin racers receive trophies, and of course bragging rights - at least until the next year.

How Did the Pumpkin Race Begin? 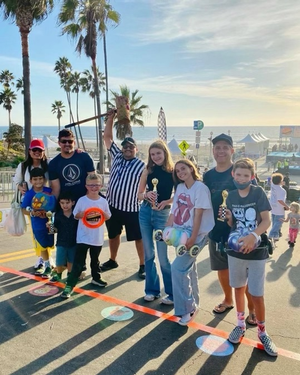 This cherished hometown event that has garnered the attention of several local and national television news networks. It was once featured in an episode of Home Improvement, and in 2004, Time Warner Cable produced and aired a documentary about the event. It has spawned countless similar events in towns across the country.

In 2007, the World Famous Pumpkin Race was awarded the National Recreation and Park Association (NRPA) Special Event of the Year award and the California Park and Recreation Society (CPRS) Award of Distinction.

How Do You Build a Pumpkin Racer?

To create a racing pumpkin, you have two options: You can build your own racer according to the rules specifications, or you can buy a pumpkin race kit.
If you make your own racer, the rules are super-specific so make sure you check with the rules page (again, you don't want to be bashed as the "cheater.")
The racer must be a single pumpkin with two independent axles through the body of the pumpkin with the wheels attached to the axles. The maximum wheel diameter is 12 inches. (Wheels larger than 12” in diameter may race for time solo - only if it is safe and time permits - and will not be eligible for a trophy.) The pumpkin cannot be attached to a prefabricated chassis of any kind (skateboard, stroller, Tonka Truck, etc.) 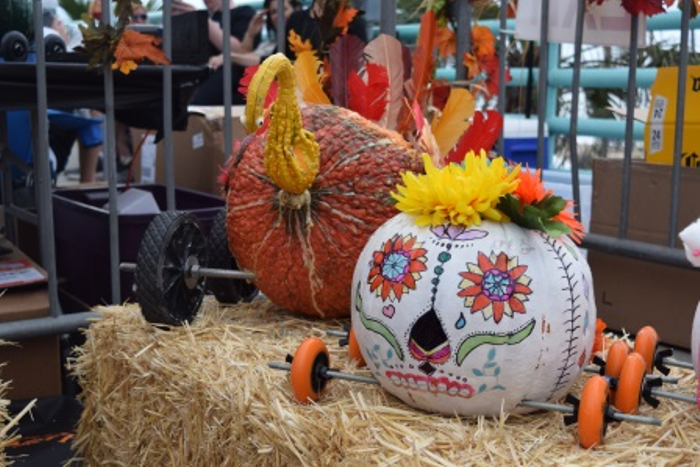 Furthermore, there are no bumpers, sharp objects, or cages allowed on a pumpkin. (Veteran racers know that no matter how fast your pumpkin rolls, there's always the chance that it might be "taken out" by a wayward pumpkin that rolls diagonally across the race lanes.)

If you want to start with a pre-fab pumpkin racing kit, the kits can be purchased in downtown Manhattan Beach at Bella Beach Kids, Gum Tree, Kalihi, Nikau Kai, Manhattan Beach Creamery, {pages} a bookstore, Tabula Rasa Essentials, Shade Hotel, Spyder, Waterleaf, or Waverly for $35 on Saturday; or for $40 on-site on Sunday.

If you need help constructing your pumpkin with the kid, a "pit crew" is available to help you on Sunday at the race.

How Does the Pumpkin Race Work?

The pumpkins in the World Famous Pumpkin Race roll down the hill at Manhattan Beach Blvd. between Ocean Ave. and the Manhattan Beach Pier.
To race your pumpkin, you get in a (long) line for the qualifying races and you race in heats of eight. If you're lucky enough to win your heat, you get a ticket to the quarterfinals. If you didn't win, you can race your pumpkin again, but you have to get back in line.
The race schedule includes several heats: qualifying races (2:00 p.m., quarterfinals (3:30 p.m., semifinals (4:15 p.m.), finals to the championship race (4:30 p.m.), and then finally the championship race (4:45 p.m.). 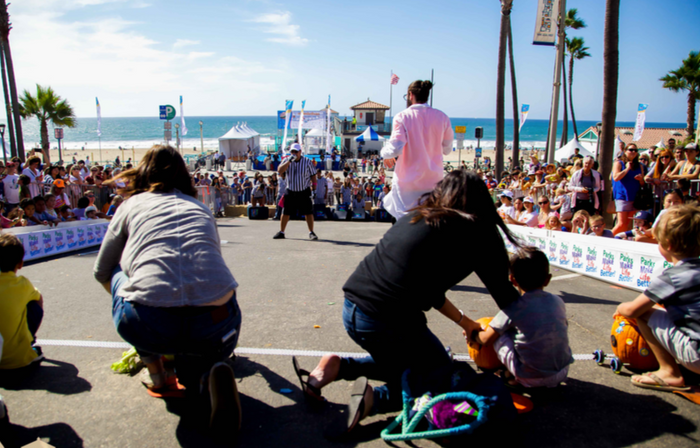 By the way, there's one way to get around the long lines. You can reserve a "Turbo Pass" through the city's online reservation system for a timed position in line.

The Turbo Passes are free, but you have to get them ahead of time (and if you don't show up at your allotted time, you lose your spot.)

What Does It Take to Create a Winning Pumpkin Racer?

Over the years, a wide spectrum of pumpkins have won the races - Light pumpkins, heavy pumpkins, tall pumpkins, low and flat pumpkins. One thing is for sure: You want a pumpkin that rolls straight so it travels the shortest distance from the starting line to the finish line.
Unfortunately, one other constant is that luck is a big factor. Even if you build the fastest pumpkin in the world, there's always that chance your pumpkin could be taken out by a rogue pumpkin that shoots diagonally across the lanes and takes your pumpkin out.
Swamp Monster and Glamorpuss in 2012 next to the Grand Champion trophy (back when the trophies were a lot bigger). Photo courtesy of the Rogers family. 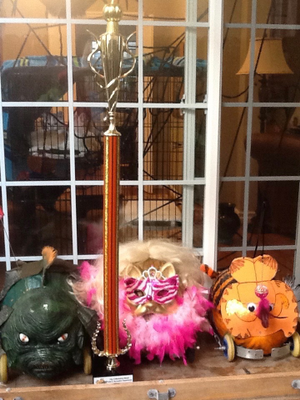 Cindy Rogers' sons Robert and Ryan Rogers were winners in 2012 with "Swamp Monster" and came in second place in 2011 with "Glamorpuss". (Glamorpuss raced again in 2012 but did not place.) Cindy Rogers said that for their family, the winning formula was "a combination of the perfect decoration for the pumpkin, plus a little ingenuity from Dad - a.k.a. the Pumpkin Engineer Extraordinaire - plus some super support from friends from school."

Rogers added that her husband Kirk would stay up until midnight before the race "getting the skate wheels just right."
Another winning pumpkin was created by Manhattan Beach Council member Joe Franklin and friends, as they took first place in the 2021 race among city officials.
Franklin, who had invited his young neighbors to help him create a pumpkin for the race that they called the "Pine Ave. Racer," said that creating the pumpkin racer was a true group effort that involved a lot of trial and error. 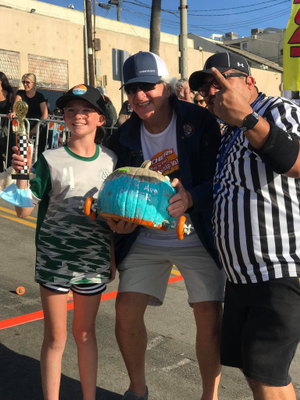 Councilmember Joe Franklin and his young neighbor with the Pine Ave. Racer - Photo via Joe Franklin

"We must have conducted 20 trial runs on Pine Avenue - hence the name, 'Pine Ave Racer.' We made adjustments as best we could - several neighbors came by to offer advice - and set off for the track."

Franklin offered a few other tips: One, many winning pumpkins use zip-ties (one on each side, connecting the two axles) to help their pumpkins stay straight. Two, you want to do a few trial runs but not too many trial runs, because the pumpkin flesh might wear away. (It is a giant fruit, after all.)

And finally - for 2022 - Franklin notes that that stretch of Manhattan Beach Blvd. has recently been slurried, which should make for a super-smooth, super-fast ride.

Racers, get your pumpkins ready!
Headed to the World Famous Pumpkin Race? Get there early or plan to ride a bike or rideshare, because the Skechers Friendship Walk takes place right before the Great Pumpkin Race and parking will be in short supply. A street closure map can be found here. Local hotel options include Shade Hotel, The Belamar Hotel, and Westdrift.