Manhattan Beach City Council candidates all agree on the answer "Yes" to a question posed at a forum sponsored by the Downtown Manhattan Beach Business and Professionals Association earlier in the campaign.

Election results are rolling in for the Manhattan Beach City Council and MBUSD school board races, with just under 10,000 votes counted by early morning.
(See the L.A. County election results here, last updated at 3:35 a.m. on Wednesday.)
In the Manhattan Beach City Council race, where two seats are up for election, Amy Howorth is currently in the lead with 4,030 votes, followed by David Lesser with 3,969 votes.

Incumbent City Council member Suzanne Hadley is currently in third with 3,316 votes. All other candidates are well behind. 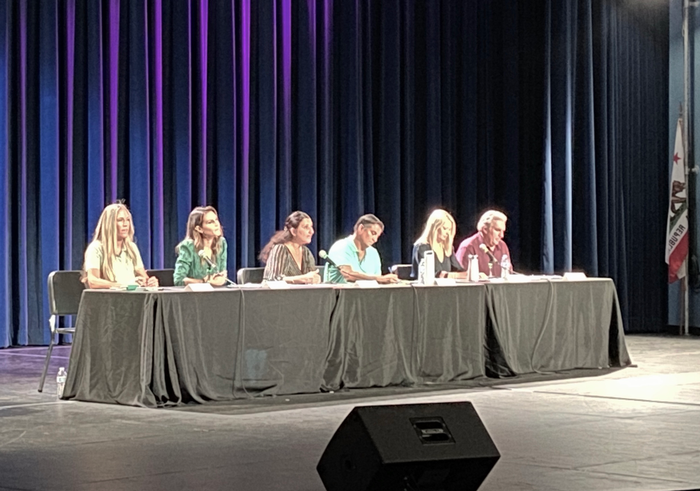 School board candidates at an election forum sponsored by the Manhattan Beach Chamber of Commerce.

The vote for school board trustees, with three seats up for election, is led currently by incumbent Jen Fenton at 4,950 votes. Close behind are Tina Shivpuri at 4,713 and Wysh Weinstein at 4,443.

A group of three candidates who ran for school board, effectively as a slate, is further behind. Christy Barnes has the highest vote total among them at 3,354, John Uriostegui is at 3,311, and Mike Welsh is at 3,286.

In the city council race, the current leaders, Howorth and Lesser, have both served on council previously and are well-known to local voters. Howorth served on council for two terms from 2011-2019, in addition to serving on the MBUSD board from 2003-2011. Lesser's two terms on council overlapped with Howorth's, from 2011-2019. Due to Manhattan Beach's rotating mayorship, both Howorth and Lesser have served as mayor twice.

Notably, during the campaign, current council members Mayor Steve Napolitano and Mayor Pro Tem Richard Montgomery endorsed Howorth and Lesser, to the exclusion of their current colleague on council, Hadley. They paid for advertising to promote their endorsements.

Hadley, for her part, endorsed the group of three candidates for school board (Barnes, Uriostegui and Welsh) who had run as a slate. Vote totals coming in so far show that Hadley and the school board slate are netting virtually identical numbers of votes, within a few dozen of one another (Hadley 3,316; Barnes 3,354; Uriostegui, 3,311; Welsh, 3,286).

How Many Votes Have Yet to Be Counted?

How many votes have yet to be counted? Trust us, our team of nerdy green eye-shade researchers has been crunching the numbers on this all night.
County election results as reported now do not show a percentage of votes counted. However, MB News estimates that a total of approximately 50-55% of all votes expected have been counted so far.

The last report of voter registration for Manhattan Beach counted 26,336 voters in the city, according to the Secretary of State. If voter turnout for this year's midterm election mirrors turnout from the November 2018 midterm election, then approximately 19,500 votes would be expected when the count is completed. With 9,771 votes counted on Measure MB by early this morning, the count was at 50% of that turnout scenario. If, instead, turnout is closer to 2010's 68%, then the votes counted so far are 55% the the expected total. (See historical midterm election totals down below current race totals.)

This November election is only the second time Manhattan Beach municipal elections have appeared on a general-election ballot, the first time being November 2020. Previously, local candidate elections were held in March, but with minuscule participation.

This story will be updated as vote counts are updated by LA County.

According to LA County elections officials, the first reported results Tuesday evening would have been only vote-by-mail ballots returned before Election Day. The overnight report was expected to include all ballots cast at a Vote Center through Election Day. These totals do not include Vote By Mail ballots received on Election Day, Conditional Voter Registration Ballots, and Provisional Ballots.

According to the Secretary of State's office, as of Oct. 19, 2022, voter registration in Manhattan Beach for this election totals 26,336 voters, with the top three affiliations being: