Manhattan Beach Mayor Steve Napolitano addresses the crowd in Polliwog Park at the launch of United Against Hate week.

The South Bay Community Coalition of Leaders Against Hate officially launched its "United Against Hate" week on Sunday at Polliwog Park.
This event, which drew around 100 community members, featured the unveiling of the new rainbow pathway around the main gazebo as well as special guest speakers.
"We are here together because we are inclusive, we are welcoming, we are a loving community, and that’s what we want to launch with this week," Manhattan Beach Mayor Steve Napolitano told the crowd.
The coalition's stated goal for the week is to stand up against hate of all kinds and promote tolerance and inclusion.
Sally Peel, president of the Manhattan Beach Unified School District's school board, referenced several recent incidents of hate that the city and its schools have experienced.
"[Those incidents are] not who we are as a community, and your presence here today shows me that," said Peel, who encouraged parents to have age-appropriate conversations with their children about hate. "With good people everywhere, we will stand up against hate in our community."
Manhattan Beach Middle School and Mira Costa High School both on their way to joining Manhattan Beach's elementary schools in being certified with the Anti-Defamation League's "No Place for Hate" designation, Peel noted.
Once those two schools are certified, said Peel, Manhattan Beach is set to be the first school district in the Los Angeles region to have earned the "No Place for Hate" designation at all of its schools.

Coalition Formed in Response to Incidents

According to the Manhattan Beach Police Department (MBPD), there have been 10 reported hate crimes within the city since January 2022. (See our report on the string of hate-related incidents here.)
In response to multiple instances of hate in town, Councilmember Hildy Stern formed the South Bay Community Coalition Against Hate to educate, raise awareness, foster a sense of belonging, and support efforts to apprehend those who commit these crimes.
The coalition includes Manhattan Beach leaders from the city, MBPD, MBUSD, Manhattan Beach Education Foundation (MBEF), the Manhattan Beach Chamber of Commerce, L.A. County Supervisor Mitchell’s Office, American Martyrs Catholic Church, Congregation Tikvat Jacob, the Jewish Community Center, the Beach Cities Health District, and the L.A. County Commission on Human Relations.
Both the City Council and the MBUSD Board of Trustees have since made formal resolutions to denounce incidents of hate. On October 6, the city approved a resolution condemning antisemitism that aligned with the International Holocaust Remembrance Alliance's working definition of antisemitism. The school board followed with a similar resolution on October 26.

On Monday, L.A. County leaders will officially launch United Against Hate Week in a ceremony at 9:00 a.m. at the Kenneth Hahn Hall of Administration at 500 W. Temple Street in Los Angeles. The event will be livestreamed on Facebook, Twitter, and YouTube.
On Tuesday, the Manhattan Beach Education Foundation is hosting a free 6:30 p.m. screening of the documentary film “RACE to be Human” followed by a panel discussion, at the Mira Costa Auditorium.
“RACE to be Human” is a documentary told through the lens of students, experts, and educators, which explores how to foster healthy conversations about race and racism and how we can collectively move toward dignity and respect. The film is appropriate for ages 10 years old and up.
To end the week, the coalition is promoting a Community-Wide Moment of Silence on Friday, November 18 at 9:31 a.m. For one minute, community members of all ages are asked to pause, focus their breath, and quietly think about how we all can positively support others.
Lawn signs and window signs that say, “MB Stands United Against Hate” will be available for pick up at schools, city facilities, and other locations throughout the city during the week. 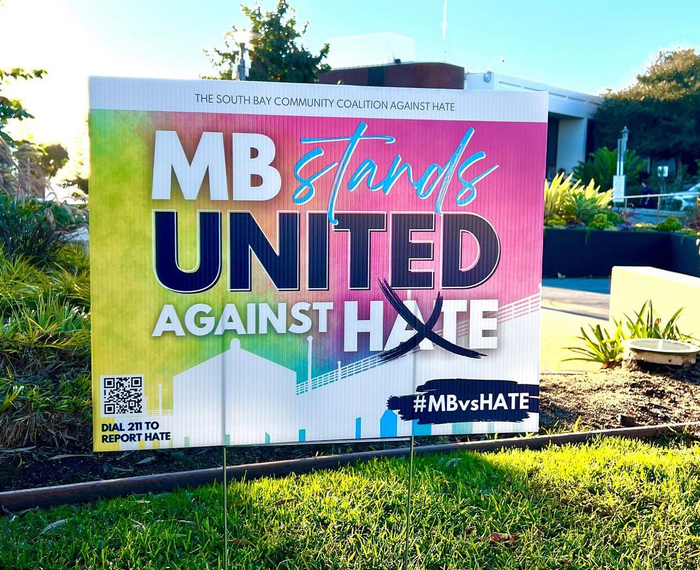 The coalition will continue to organize educational and awareness programs, while also working with MBPD to hold any individual(s) who have committed a hate crime accountable for their actions.
For more information and additional resources, see www.mbvshate.org.

MB United Against Hate [6 Images] Click Any Image To Expand