"Pierhenge" - the period of several days in November and January when the sun sets perfectly through the Manhattan Beach Pier - has given photographers glorious shots this year.
The above photo, shot by Manhattan Beach photographer Evelyn Schmitt, was taken on November 17, at what she called "the most beautiful and colorful Pierhenge I have ever captured."
The Pierhenge phenomenon roughly coincides with the Light Gate sunset, the two days of the year that the sun sets perfectly through the Light Gate sculpture at City Hall. The Light Gate sunset is always on November 14 and January 27.
However, since there's a wider visual opening at the Manhattan Beach Pier, Pierhenge can last several days in either direction.
"The clouds make the difference," said Schmitt about her classic photo. "Often times it’s just a plain blue sky, but this time the clouds were accumulating early. They were very heavy. I didn’t even think we'd see the sun set last night. It broke through very late."
In fact, Schmitt added, "While we were waiting for it, the guy next to me said, 'Last night was perfect; this night is not going to be anything,' - right before the sun broke through."
Thursday night's photographers were among a lucky few; there were only about 10 photographers on hand. That compares with one November night last year when about 100 photographers showed up for Pierhenge.
For those who still want to get a perfect shot, Pierhenge might last for another day or two, said Schmitt.
To shoot the above Pierhenge photo, Schmitt used a Nikon Z9 with a 24-70mm f/2.8 lens. 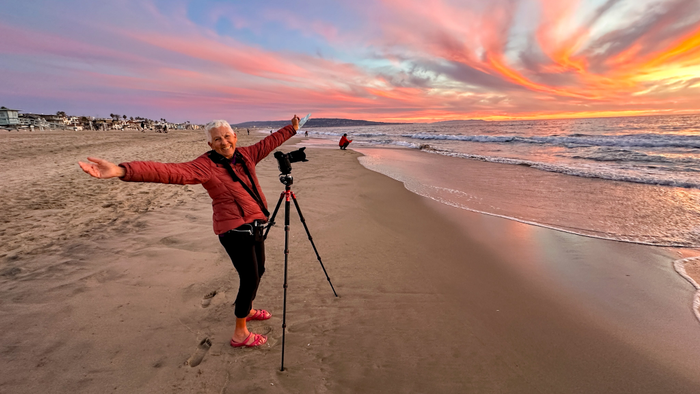 Manhattan Beach photographer Jefferson Graham, who was also at this year's Pierhenge, shared this photo he took of Schmitt with the stunning sunset in the background. Graham called Schmitt "a master photographer" who is "an inspiration to all of us to have this kind of enthusiasm and talent in your 80s."

Schmitt had just returned from Churchill, Canada where she was photographing polar bears with Creative Photo Academy, and also traveled to Africa this year on a photography trip. Most days, however, she can be found shooting sunsets and sunrises at home in Manhattan Beach.
(Schmitt says that she does not have a photography business per se, but she keeps her photos on file at Paul's Photos. Anyone who wants to purchase one of her photos may talk to Jeff at Paul's Photo in Torrance, where he can print them out on a high-end printer. Whatever money she earns, she keeps in an account at Paul's Photo and uses it toward photography equipment.)