While thousands of people enjoyed photos with live Christmas trees at the November 16 Manhattan Beach Pier lighting, few knew about the drama (and near-panic) that preceded it.

The live Christmas trees - a beloved tradition and photo op at the pier lighting for the past 12 years - might not have happened this year if it hadn't been for a last-minute save by tree sponsor and owner of Palm Realty Boutique Brett Zebrowski (along with a few helper elves). 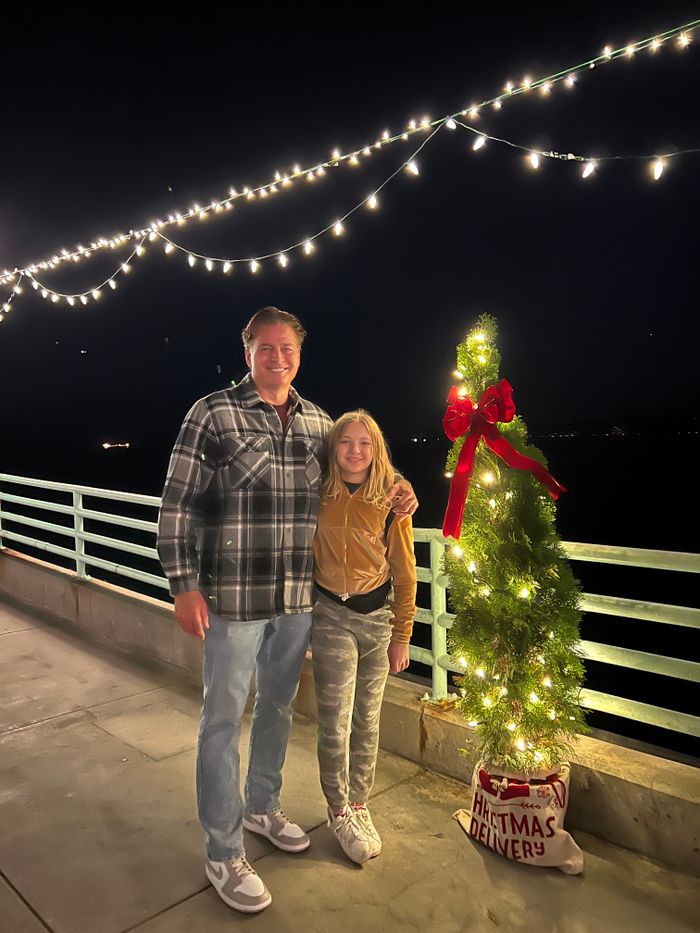 Zebrowski with his daughter at the pier lighting.

On Tuesday evening, November 15, city staff members informed Jill Lamkin, executive director of the Downtown Manhattan Beach Business and Professionals Association, that the usual tree supplier had not come through as planned.

Lamkin then called Zebrowski, who has sponsored the live trees for the past five years in honor of his late brother Scott, and told him that it looked like there would not be any trees this year.

But Zebrowski "was having none of that," according to Lamkin. 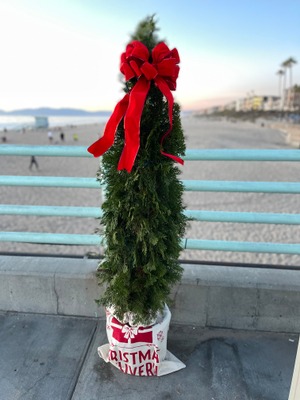 Zebrowski concurred. "I told her, 'Jill, I'm going to make this happen. This’ll be our own little Manhattan Beach miracle.'" He paused. "But I had no plan. How was I going to get a bunch of live Christmas trees in Manhattan Beach, and have them delivered and decorated by 5:00 p.m. the next day?"
Zebrowski said that he has a deep emotional and sentimental tie to the live trees because his brother had loved that part of the Christmas celebration in particular.
He also noted that he had seen people posting on social media for the past several days asking when the live trees would be put up, so he felt an obligation to follow through somehow.
"I'm the 'tree guy' now," he said. "I’m going to get blamed if they don’t show up. I don't want to be walking down the street and hear, “There’s the guy that ruined Christmas!”

Zebrowski immediately started making phone calls to every landscaper and nursery he knew - but no dice.
Cut trees and artificial trees were not an option because they are not heavy enough to survive the strong winds on the pier.
Buying trees by twos or threes from a variety of different nurseries was not an option either, because they all needed to be uniform in size and shape.
A few phone calls turned up other ideas that Zebrowski rejected as well. Three-foot evergreen bushes? Not good for photo ops. Someone offered to procure large ficus trees, which Zebrowski also vetoed. ("Whoever heard of a Christmas ficus?")
"At this point I was ready to go up into the mountains and find some trees I could cut down. I was ready to 'Clark Griswold' the whole thing," he added. 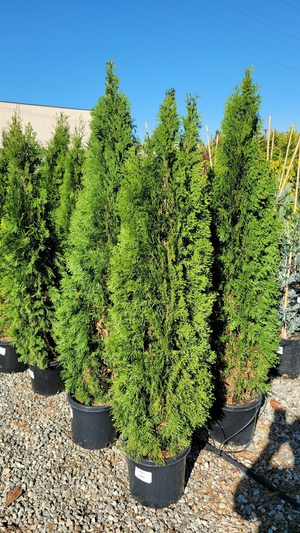 Then Zebrowski reached out to his friend Ross LaGumina ("my turf guy"), who said he had a lead at a local nursery.

Zebrowski said he needed at least 40 trees, so LaGumina checked in and then replied back with a photo of rows of perfectly pristine 6-foot cypress trees - and there were exactly 40 of them on the lot.

"I'm hearing these angels singing, 'Hallelujah,'" Zebrowski said. "I told Ross, "Here's my card - go rent a truck and buy every single one of them."
LaGumina managed to get all 40 trees down to the Manhattan Beach Pier by 11:00 a.m.
With the trees now in hand, there was energy and excitement building around the project. Lamkin and Zebrowski's assistant Mariam Malik ran out to find decorations.

LaGumina, who at this point was "swept up in the energy," headed over to Target, where he found large canvas bags reading "Christmas Delivery" to put at the base of the trees.

How many bags were there in stock? Exactly 40.

"Everyone had to work together to get it done. And we somehow pulled it off. And when I saw photos of them unloading the trucks. I was joking about it, but I kept hearing in my head the song from "How the Grinch Stole Christmas" where everyone is holding hands around the tree and singing," said Zebrowski. 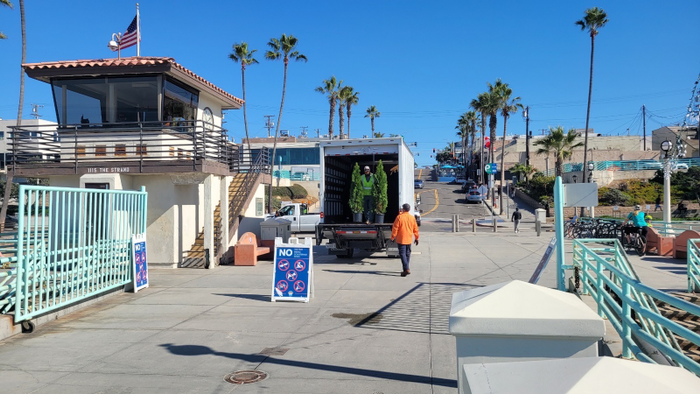 "This was like a Hollywood, Disney, feel-good, Miracle on 34th Street ending," he added. "We couldn’t have scripted it better. Every single thing just fell in line, and it was beautiful." 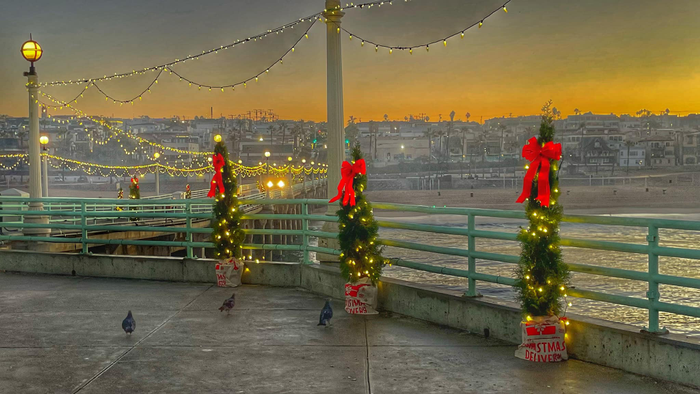 The previous live tree supplier had always rented out the trees and then taken them back a week later. But this year, now that the trees have been purchased, the options are wide open, said Zebrowski. 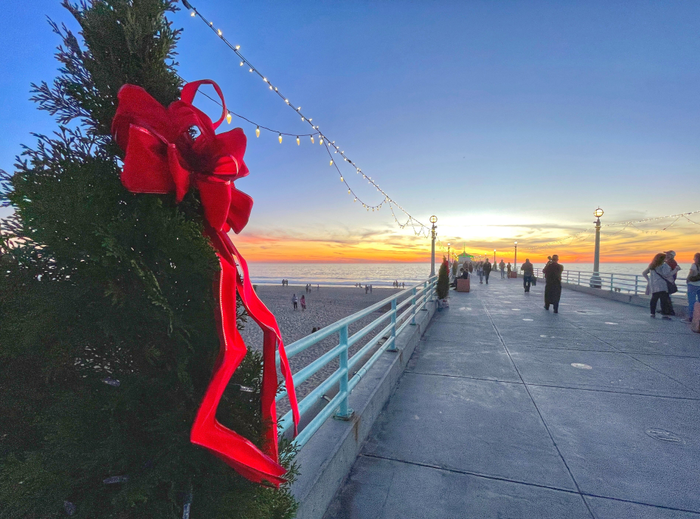 First, Zebrowski is looking into whether the trees will hold up long enough to stay on the pier until the night of the Manhattan Beach Fireworks on December 11.

After that, he said, he is considering selling the trees with all proceeds going to St. Jude's Children's Hospital. 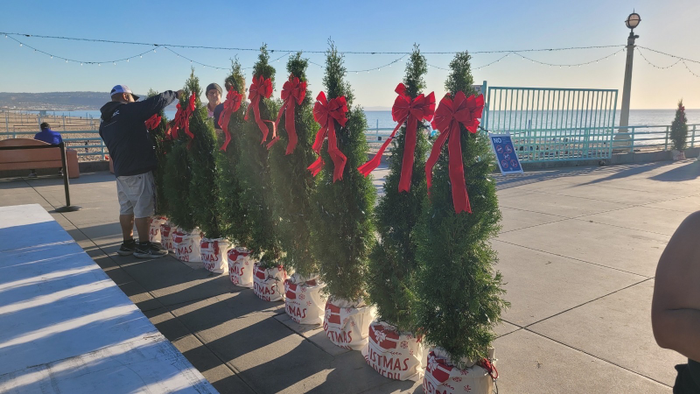 And in the future, since he plans to continue purchasing trees rather than renting them, he envisions all sorts of possibilities for community events. For example, he said, local groups could "adopt" a tree and decorate it for a decorating contest.

Zebrowski said that it is always a treat for him to see people enjoying and taking photos with the trees at the pier lighting event, but it was especially poignant this year.

"Having the actual live trees - There's just something about it. It makes you feel like going back to being a child at Christmas," he said.

Remembering his brother, he added, "It's a chance to feel closer to him."