Three Manhattan Beach Unified School District school board members - two new and one returning - were sworn in on Wednesday night.
Newcomers Tina Shivpuri and Wysh Weinstein joined returning member Jen Fenton in pledging to serve the Manhattan Beach schools for a new four-year term.
Through the board reorganization, Cathey Graves was named the new president, Jen Fenton was named the new vice president, and Weinstein was named clerk.

Outgoing Board Members Lauded for Work 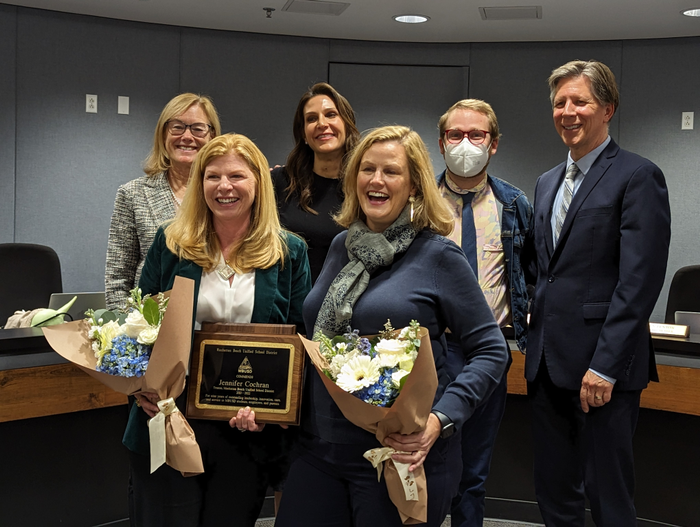 (Outgoing board members Jennifer Cochran and Sally Peel pose with board members Cathey Graves, Jen Fenton, and Jason Boxer, along with MBUSD Superintendent John Bowes. Photo via Diana Skaar.)
Multiple former board members were in attendance to support the new and outgoing members. Several former administrators also sent along messages of congratulations.
MBUSD Superintendent John Bowes thanked the outgoing members, and credited them for their service during the difficult times of the pandemic. "Your steadfast commitment to our five board goals have been so encouraging to me and to our management team," he said. "You both just have such a broad range of knowledge."
Peel and Cochran both thanked their colleagues for the teamwork they shared on the board.
"I am so proud of the work we have done, and I am proud of the work that will be done here," said Peel. "The past few years have been taxing, and I'm so glad I went through them with this group."
Schools