The Manhattan Beach City Council approved the hotly contested Highrose/Verandas project at a special meeting on Thursday night, on a vote of 3-2.
Mayor Pro Tem Richard Montgomery, along with Councilmembers Amy Howorth and David Lesser voted to approve the project, while Mayor Steve Napolitano and Councilmember Joe Franklin were the "no" votes.
The vote marked a reversal from October, when the City Council at that time voted down the project, also on a vote of 3-2. In the October vote, Napolitano was joined by Councilmembers Suzanne Hadley and Joe Franklin in voting "No," while Hildy Stern and Richard Montgomery voted in support of the project.
In the period since the October denial of the project, not only have council members changed, but the full scope of legal exposure and consequences for the city have begun to come into focus. As the city considered those threats,the City Council agreed to revisit the issue.
Both Howorth and Lesser said before Thursday's vote that they had read through more than 2,000 pages of documents, and were fully "up to speed" on the issue and the potential consequences to the city of rejecting the project.
"There is no legal basis for me to deny this project," said Howorth before the vote. "I’m holding my nose because I’m following the law, but I feel like I’m preventing an even worse fate for this city."
The Highrose/Verandas project is proposed as a 96,217 square-foot, four-story multifamily residential structure at Highland and Rosecrans. The design calls for 79 units, six of which would be set aside for "very low income" households.
The proposal has drawn vocal opposition from many residents, who have said that it would take away from the small-town character of the El Porto neighborhood and make traffic and parking issues significantly worse.
Furthermore, opponents have cited a potential "adverse impact" to health and safety of future residents due to the proposed development's proximity to the neighboring Chevron refinery in El Segundo. Napolitano had cited that potential "adverse impact" when casting the swing vote to turn down the project in October.
In a staff report delivered before Thursday night's meeting, Acting Community Development Director Talyn Mirzakhanian wrote that the Housing Accountability Act says that the city cannot reject the project unless the project has a "significant, quantifiable, direct, and unavoidable impact upon public health and safety."
"To date, no such adverse impact arising from the project has been identified by the appellants or the public. Proximity to Chevron is not a significant, quantifiable, direct, and unavoidable impact resulting from the construction or operation of the proposed housing development project," she wrote.
Opponents of the project had also said that a CEQA review should be required to assess the potential impact of the Chevron refinery on residents of the complex - and that low-income residents who would be beneficiaries of the low-income units should not be compelled to live near a refinery. However, Mirzakhanian and other staff members emphasized that the purpose of a CEQA review is to assess the impact of the construction on the environment, not to assess the environment's impact on potential future residents.
El Porto is a sought-after destination with ocean views and great surf. Notably, more than 35 properties sit on Crest Drive in El Porto directly backing up to Chevron property, and many others sit adjacent to those properties east of Highland Ave. Those properties trade for millions.
One property, 4113 Crest Drive, is a new construction 2,295-square-foot single family home on a 1,350-square-foot lot, currently asking $4.9 million. A 1,995-square-foot townhome at 4419 Crest Drive sold for $2.41 million in October 2022.

Prior to the council's re-vote, the city had faced costly legal challenges and threats of significant penalties from the state.
The project's developer, Highrose El Porto LLC, filed a $50-million-dollar lawsuit against the city seeking damages and attorney's fees. Additionally, Californians for Homeownership, YIMBY Law, and California Renters Legal Advocacy and Education Fund (CaRLA) indicated that they intend to begin litigation against the city if the City Council did not “rehear” the project.
Furthermore, California's Department of Housing and Community Development served the city with a “Notice of Violation” of applicable housing laws for its denial of the project.
Future penalties from the state for denying the project could include the state denying Manhattan Beach's housing plan, and/or possibly stripping the city of its authority to issue building permits.

The Project Verandas proposal uses state "density bonus laws," which allow developers to request waivers from development standards, such as setback and height requirements, when they incorporate affordable housing into a project. Under these terms, the Verandas project qualified for a streamlined, administrative, non-discretionary review. 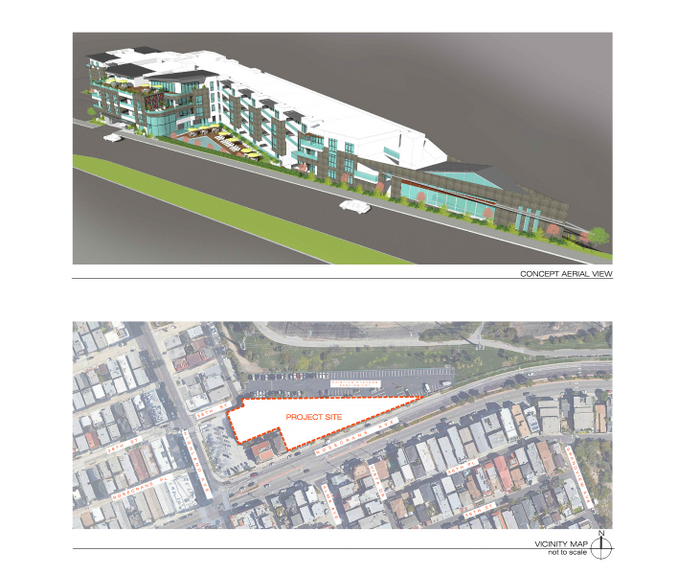 Despite vocal opposition to the project by an active group of residents, the project had moved through various stages of approval, with city officials saying that the project met the appropriate requirements for this kind of housing development.
In June 2022, Manhattan Beach's Planning Commission voted unanimously to uphold the Community Development Director's approval of the Verandas project, turning down four appeals from members of the community.
At its August 16, 2022 meeting, the City Council had a chance to evaluate five formal appeals filed by residents. City staff walked council members through a presentation in which they outlined reasons for rejecting each of the five appeals. The council heard hours of discussion on the topic, then voted to continue the discussion before making a final vote.
In September 2022, the city of Manhattan Beach issued a statement to "clarify the project proposal, review process, and standard of review."
The statement effectively attempted to refute widely circulated points opposing the Verandas project. The city declared that the project:
1) Is a multi-family residential project, not a hotel, or short-term lodging;
2) Is in the Coastal Zone and therefore regulated by the Local Coastal Program, which allows such plans through a streamlined permitting process;
3) Is not an SB 35 project;
4) Is exempt from CEQA (environmental review) because it is subject to the ministerial review process (and two environmental site assessments have been done even though not required).
5) Has had two environmental assessments that found that there were no conditions detected on the site that pose a threat to the environment and/or human health and that "the [Chevron] Refinery is not considered to represent a significant environmental concern to the site."
City staff also released a lengthy point-by-point rebuttal to numerous public comments made against the project. That rebuttal can be seen on that City Council meeting agenda, under Item 2, "City Responses to Additional Public Comments."
The issue was originally set for a vote in September, but was abruptly withdrawn from the agenda, according to a statement from the city, "to address residents’ concerns and questions, and consider legal options."

Environmental Assessments Had Been Conducted

On its Highrose/Verandas information page, the city notes that environmental assessments of the property had been conducted by contractors hired by the developer.

Phase I and Phase II Environmental Site Assessments (ESAs) were performed by Citadel EHS, an environmental, health, safety and sustainability consulting firm. The ESAs outlined the current and historical uses of the proposed Highrose/Verandas site in order to determine if these uses had impacted the soil or groundwater beneath a property, and whether these impacts posed a threat to human health and/or the environment.

The ESAs documented that the property was never part of the Chevron site. Furthermore, the ESAs included a subsurface investigation that involved soil samples and review of relevant databases.