The celebrated TEDx Manhattan Beach conference returned last week after a year on hiatus, bringing inspiring speakers and exhibits to nearly 500 attendees.
Fourteen speakers and 25 exhibitors presented some of their best and newest ideas, organized around the theme "Future Reimagined." From a space traveler, to a robotics scientist, to a creative mediator, the speakers showcased creative and groundbreaking concepts.

The speakers laid out their ideas, plans, and hopes for the future through 5- to 10-minute "TED talks." The speakers, and their presentations, included the following: 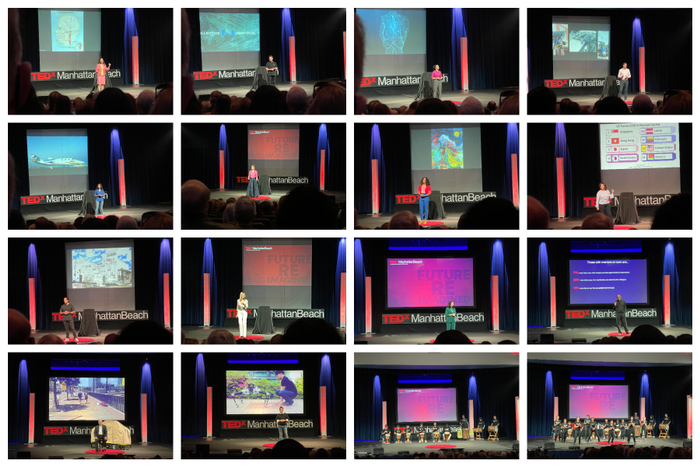 The "Expo" brought out a variety of local organizations and artists doing demonstrations and interactive activities.
L.A.-based artist LA-based artist Aiseborn led participants in a "graffiti art" project to bring thoughts, dreams and wishes alive with color and texture. The final art piece will be displayed at Mira Costa High School.
Benkadi, the drummers from the film The Black Panther, offered a West African drum circle and dance performance.
Event sponsor ESMOA, the El Segundo Museum of Art, led several activities in advance of its new Experience 49: blue/s, a multi-sensory art exhibition.
Other crowd favorites included a Maker Space exhibit by MBEF, a circuitry and coding game from the Mira Costa AP Computer Science students, and CHAZZ, an innovative take on checkers sponsored by ESMOA and created by Bernard Zuenkeler and FREETERS.
Local entrepreneurs with their wares on display included Hank Disser of Hank's Pickles at the GROW booth, Mercy Fabila of Bashi Bakes, and Taylor Ryan of Unstoppable Protective Gear.

The Manhattan Beach TEDx conference is now in its 11th year. Traditionally held on the first Saturday in November on the Mira Costa High School campus, the event is one of the most well-known and well-attended of its kind in the country.
The first TED conference was held in 1990, as a way to throw an international national spotlight on "ideas worth spreading" through short, powerful talks. TEDx events are local, self-organized events that bring people together to share a TED-like experience.
TEDx Manhattan Beach 2021 [10 Images] Click Any Image To Expand