A diagram showing a plan for a return of the beachfront property to the Bruce family, as shown at a news conference in Manhattan Beach in April 2021.

The L.A. County Board of Supervisors has voted to return beachfront property in Manhattan Beach to the descendants of Willa and Charles Bruce, owners of the historic Bruce's Beach resort.
The Board of Supervisors on Tuesday, June 28, unanimously approved the motion from Chair Holly J. Mitchell and co-authored by Supervisor Janice Hahn to return the property to Marcus and Derrick Bruce, the great-great grandsons of Willa and Charles Bruce.
Under the agreement, the land being returned to the Bruce family are Lots 8 and 9 of Peck’s Manhattan Beach Tract, an estimated 7,000-square-foot property that has been appraised at a value of $21 million. These lots are currently being used by the L.A. County Fire Department as a lifeguard training facility. The motion authorizes the county to lease back the property from the Bruce Family LLC for $413,000 each year. 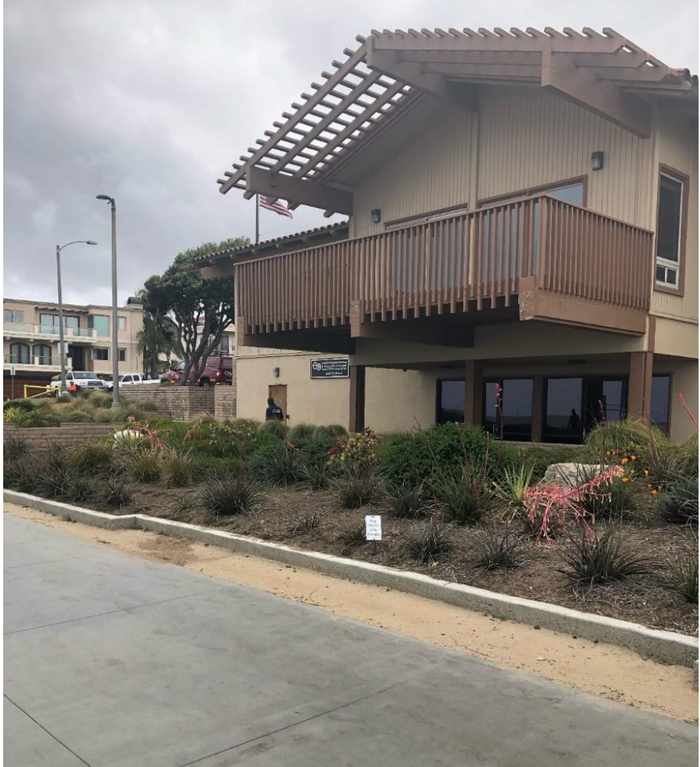 (The Los Angeles County Lifeguard Headquarters on the Strand in Manhattan Beach - the site of the former Bruce's Beach resort.)

According to the co-authors, the historic vote marks the first time in the history of Los Angeles County that land will be returned to Black descendants whose ancestors lost property due to actions rooted in systemic racism.

“Bruce’s Beach has always been so much more than a scenic location to enjoy the California coast," said Mitchell in a statement following the vote. "It was a refuge for Black families who came from across the state when racist laws wouldn’t allow for any other safe beach-going options. It holds the memories of countless Black families, the deep pain of multi-generational loss, and the hope that comes from facing the heinous acts of our past and having the courage to do what is right today. I am deeply honored to stand with the board in completing this unprecedented return of land to the descendants of Charles and Willa Bruce. Manhattan Beach, which was previously part of the fourth district and is now in the second district, has a new chapter in our shared history that exemplifies how we can begin to meaningfully address long-standing injustices in this county and nation.”

Bruce's Beach Park, a grassy terraced park located East of the lifeguard facility, is owned by the city of Manhattan Beach and is not affected by the transfer of the county-owned beachfront land.

The county's action drew a range of reactions yesterday.

“This is a day we weren’t sure would ever come," said Anthony Bruce, a spokesman for the Bruce family, in a statement following the vote. "The return of our family’s property happened thanks to the hard work of many, many people. It means the world to us, and we know how important this is to people across the country. But it is also bittersweet. My great-great-grandparents, Willa and Charles Bruce sacrificed to open a business that gave Black people a place to gather and socialize, and Manhattan Beach took it from them because of the color of their skin. It destroyed them financially. It destroyed their chance at the American Dream. I wish they could see what has happened today. We hope this opens people’s eyes to a part of American history that isn’t talked about enough, and we think it’s a step toward trying to right the wrongs of the past.”

Meanwhile, leaders from Indigenous groups welcomed the news but also called for further acknowledgement of the original tribal owners of the lands.

Angela Mooney D'Arcy, the executive director of the Sacred Places Institute for Indigenous Peoples, requested that the Board of Supervisors recognize the Gabrielino Tongva in its documentation as the original caretakers of the land. She also called upon the board to meet with leaders and members of the Gabrielino Tongva tribal communities to learn more about their priorities for their ancestral homelands in the context of land return.

"This is a joint agreement between the county and the Bruce family regarding the disposition of property owned by the county that had been previously owned by the Bruces. The city was not asked, nor was it required to be involved," said Napolitano in an email to MBNews. "Nevertheless, it is the result of a difficult but necessary reexamination of the events that led to this moment which the city was very much involved in. The Manhattan Beach of today is a welcoming, inclusive community whose city council voted unanimously to acknowledge and condemn the wrongful taking of the Bruce property nearly 100 years ago by a much different city council at a much different time in American history. We’re glad for the opportunity for all involved to learn from it, and now move forward from it.​

The effort led by Los Angeles County leaders to return the land to the Bruce family reached a significant milestone in September 2021 when California Governor Gavin Newsom signed SB 796, a bill permitting the return of the county-owned beachfront property to the Bruce family, into law.

Meanwhile, within Manhattan Beach, it was not until 2006 that the city publicly acknowledged this chapter of its history by naming the area east of the beachfront property Bruce's Beach Park and establishing a plaque in that location. In the summer of 2020, a movement began growing for the city to take further action to recognize the Bruces.
Despite creating a Bruce's Beach Task Force and adopting a history report created by the task force, the Manhattan Beach City Council struggled for nearly a year with finding compromise on the wording, location, and style for a new marker honoring Bruce's Beach and the Bruce family.
The City Council approved the plaque language on March 10, 2022 and the plaque design on April 19, 2022.
Also in March, the City Council reaffirmed its policy disallowing special event permits at Bruce's Beach Park, going against a recommendation of the city's Parks and Rec Commission. Councilmembers voted 4-1 to uphold the current special events policy that excludes Bruce's Beach as well as Larsson Parkette and 8th Street Parkette from the permitting process.
This year, Juneteenth was a relatively quiet day at Bruce's Beach Park, with just a scattering of families enjoying picnics and with city-contracted security staff on hand.