On a relatively cool, cloudy Saturday morning, more than 3,000 participants completed the Manhattan Beach 10K. The unique community-based race celebrated its 45th anniversary this year.
The first finisher was Andrew Barrington (age 32) of Venice, in a time of 33:37. He was followed just 2 seconds later by Lance Capel (28) of Torrance, and 5 seconds after that by Jaden Milbrodt (19) of La Canada. 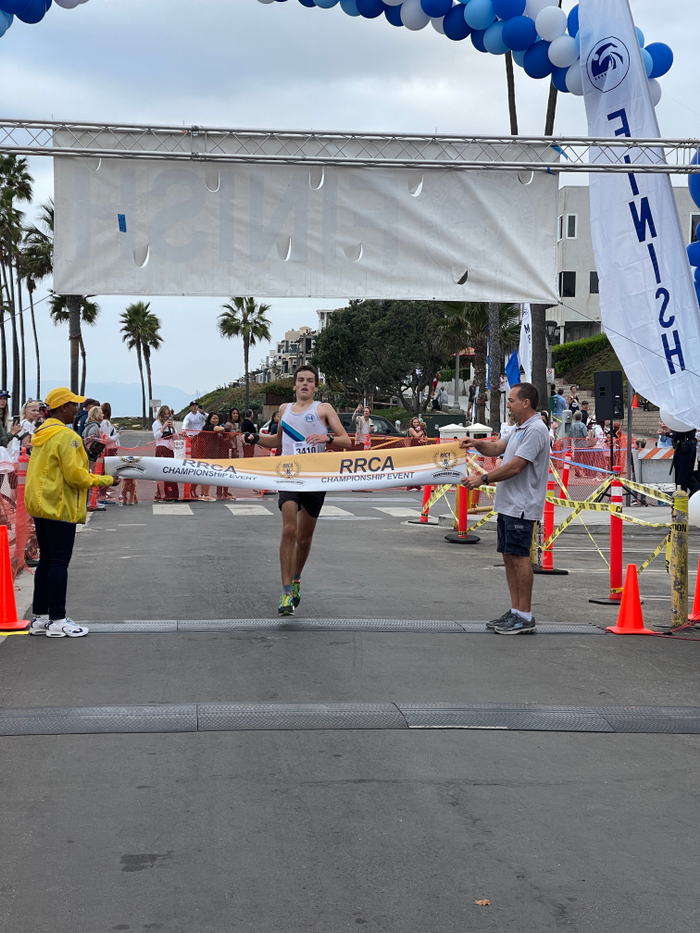 Andrew Barrington is the first to cross the finish line at the MB10K
"It's a good course," Barrington (who is originally from Scotland) told MB News. "There are some little hills to make it interesting, which I quite like, actually; it makes it a bit more tactical."
Barrington, who was running the MB10K for the first time, was part of a tight pack of about five to six runners that led the race for most of the way.
"There was a bit of to-ing and fro-ing," Barrington said. "I wasn't in front for that much of the race; just kind of the last part. But it was a good little bunch at the front, they were all sort of a similar pace. Just what you need, really."
Barrington also expressed appreciation for the "good value" of the race's entry fee.
On the women's side, Kelli Capel (age 28) of Torrance came in first in a time of 36:14. She was followed by Lindsay Wandzilak (35) of Manhattan Beach and Ryan Burger (14) of Hermosa Beach.
"I love the course," Capel, a Mira Costa High School graduate, told MB News. "There's lots of people out and cheering...I love local races because you know a lot of the people."
Capel also ran the race last year after just having had a baby, in an impressive post-partum time of 43:15. "Last year, it was kind of just a little more for fun, a little harder of an effort," she said.
The winners received $250 each for the overall male and female runner, as donated by 3 Leaf Realty.
This year, the MB10K was also designated by the Road Runners Clubs of America as the
California 10K State Championship race. Championship medals were awarded to the overall
male and female winners as well as in the 40+, 50+, and 60+ age groups.
Full race results are available here.

The popular annual 10K event draws a wide range of community participants. According to race director Michael Weisberg, a total of 3,976 people signed up - just 24 people short of a complete sell-out. 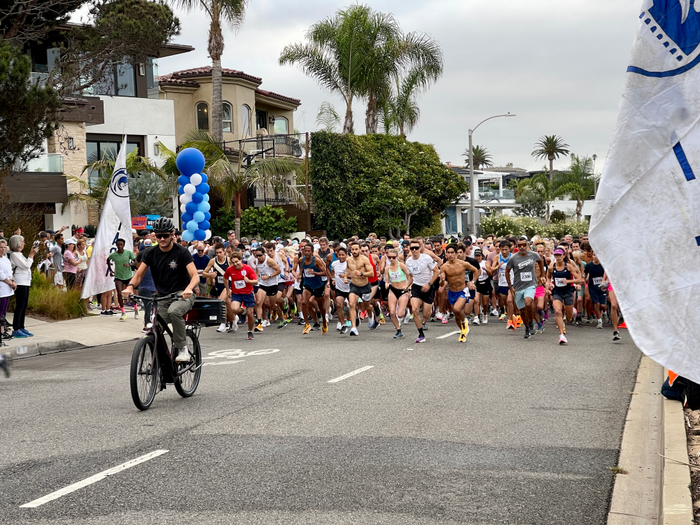 High-profile community members running the race included Manhattan Beach City Councilmember Joe Franklin and Police Chief Rachel Johnson.
"I had a great time, there was great weather...you can't beat it," said Johnson, who expressed appreciation for the local cheering groups, the bands, and the "awesome" Girl Scouts who helped out with cookies.
(Franklin, meanwhile, had to do a quick turnaround so he could participate in the MB Hometown Fair opening parade about an hour later.)
Other recognizable groups included Mira Costa High School cross country runners, members of the Club Ed local running crew, and the P.I.E.R. (Participated in Every Race) runners, who have run the MB10K every year since its inception. (See our companion story on the P.I.E.R. Group here.)
Numerous local volunteers lined the race course, finish line, ran the t-shirt stands, and helped with registration at Village Runner in Manhattan Beach.
And at the race expo, Manhattan Beach grocery owners Kathy and Barry Fisher of GROW held their traditional (and popular) post-race grape giveaway.

The MB10K is the largest "pure" 10K in California (meaning only a 10K run, no other races) and has been ranked as one of the top 100 road races in the United States. Of those top 100, it is the only one without a corporate sponsor, thanks to its all-volunteer race committee, and its only source of income is the runners' entry fees.
A time-honored MB10K tradition is for the race committee to donate all proceeds directly back to the community in the form of health and fitness enhancements to the recreation facilities of local schools and parks, local school booster clubs; as well as scholarships to Manhattan Beach high school seniors.
Since its inception, total MB10K donations have surpassed $575,000 and include Mira Costa High School track refurbishing, an exercise facility at the Manhattan Beach Middle School, a climbing wall at Manhattan Heights Park, Strand mile markers, a play structure at Polliwog Park and artificial turf at AYSO field on Marine.
Manhattan Beach 10K 2022 [21 Images] Click Any Image To Expand