The P.I.E.R. Group - a small but mighty cadre of people who have run all 45 of the past MB10K races - represents a tradition that is unique and special to Manhattan Beach.
All 30 members of the elite group, most of whom are in their 70s or 80s, ran and finished Saturday's race in the allotted time this year, said MB10K race director Michael Weisberg.
For the P.I.E.R (Participated In Every Race) Group members, the tradition of running the race is an important one to uphold.
"It's really a tradition that is very unusual," P.I.E.R. member Lon Clearwaters, 80, told MB News. "I've been running races for a long time and this is the only race that does this."
The P.I.E.R. runners are treated as V.I.P.s at the race, receiving special t-shirts and gift bags. This year's gift bag was sponsored by Dive N Surf. (Longtime Dive N Surf president Russ Lesser, 81, is founder of the MB10K and a P.I.E.R. Group member.) It included a special 45th anniversary t-shirt, a plaque with a design that included all 45 race shirt designs, a special license plate frame that highlights 45 years of the MB10K, and a $2 bill (for good luck).

An Annual Event 'Better than Christmas'

So how did the race go for these determined runners?
"I felt good about how I ran," P.I.E.R. member Dick Douglas, 80, told MB News after the race. "I've been doing it for 45 years and there are not too many changes. You get used to the course; you know where to push it, and where to say, 'I can walk this part.' But listening to those bands, and hearing people yell - it's really inspiring. People shouldn't discount that. It makes a difference." 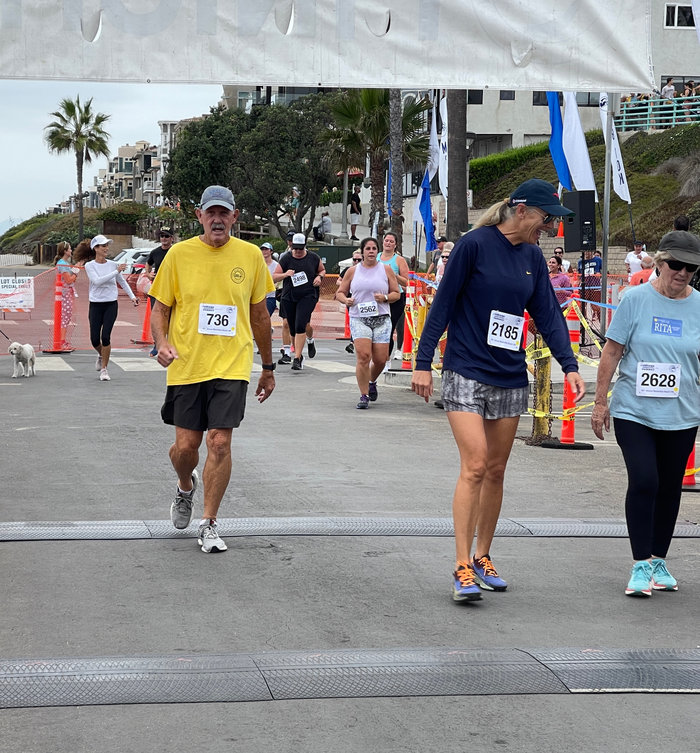 "I always do my best time at the 10K - and that applies to my mile times as well as the overall time," said Helgevold. "On any given day I could not do this, but the motivation of all the people, the bands, and the fact that it's my 45th year motivates me beyond belief, and I feel great. In fact, I did two practice 10Ks in the last two or three weeks and I felt terrible after them. But I feel wonderful right now."

Helgevold said that he lived in Manhattan Beach for 40 years but retired to Tucson, Arizona eight years ago. Every year, he rents a beach house for a month before the race and trains on the Strand with his brother. ("He's run maybe 40 of them.")

"My nieces run with me," added Helgevold. "We trained one of my nieces to run when she was in high school, and she has not missed a race since then. She's 32 now. and this is her favorite day of the year; this is better than Christmas to her."

And Lon Clearwaters' view of the race? "They're getting longer every year," he quipped.

The Manhattan Beach 10k race came together 45 years ago with a simple purpose: to put on a road race. It was 1978 and the running boom was in full effect. Newly elected city councilman Russ Lesser got permission from the city, expecting about 400-500 participants.
They got over 2,000 runners - and the MB10K was born.
"The basic philosophy of the race has not changed from the beginning," said Lesser in an interview with MB10K staff. "As runners, we knew what we liked in a race, so we set the following rules: The race would start on time. There would be no political or other speeches ahead of time that no one wanted to hear. Everyone would get a time and a place. There would be lots of awards. And, most importantly, there would be no advertising on the t-shirt, and as it was a finisher shirt, you had to run the race to get one." 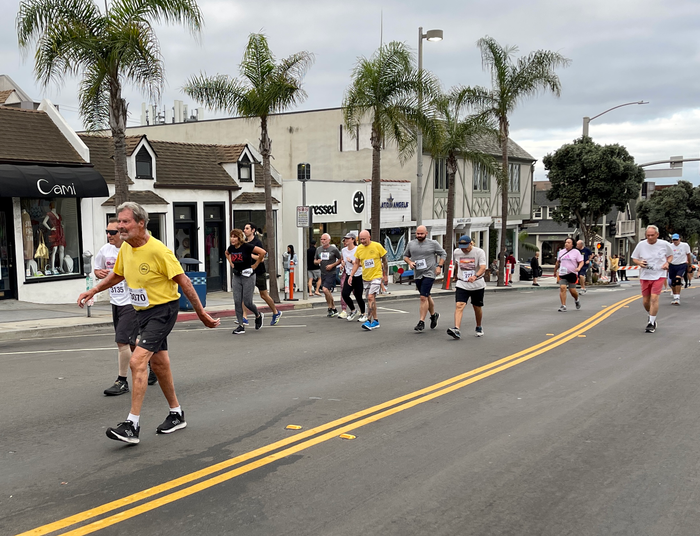