TEDx Manhattan Beach speakers gather together after the show on Saturday.

TEDx Manhattan Beach - with the theme "Jump Start"- literally started with a giant leap on Saturday, with popular longtime host Paul Silva "leaping" onto the stage.
That was followed by a series of astonishing jumps, flips, and lifts as the acrobatic team Positive Impact Movements took front and center. 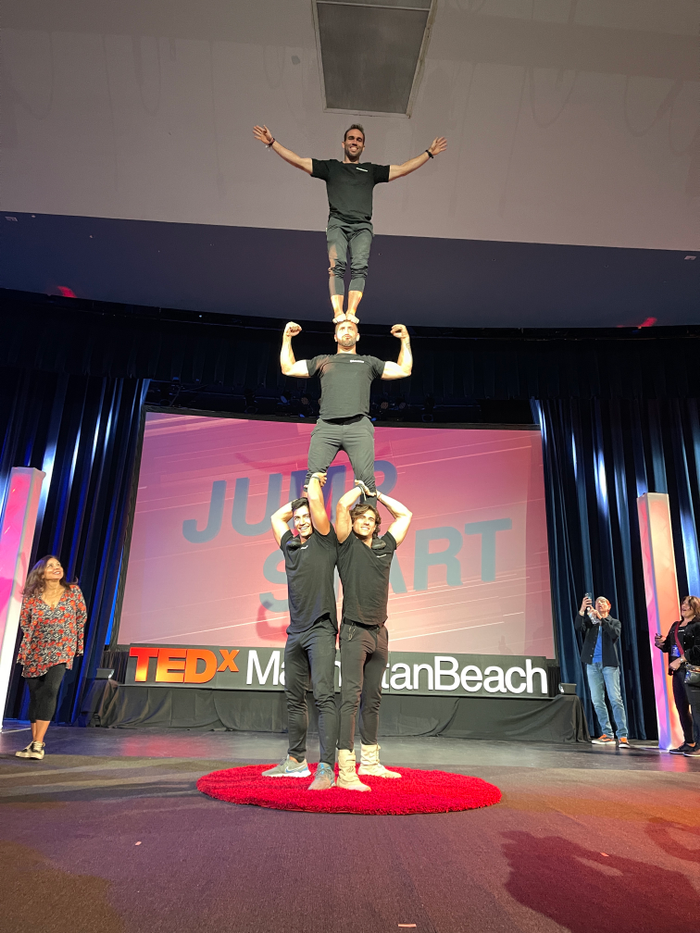 Then throughout the day, speakers and presenters took the audience of 600 through mental jumps and twists as they introduced new ideas in engineering, mental health, entrepreneurship, environmental science, education, branding, comedy, and more.
The celebrated TEDx Manhattan Beach conference, now in its 12th year, is one of the most popular TEDx events in the country and sells out nearly every year.  Videos from TEDx Manhattan Beach events have more than 40 million total views on YouTube.
Each year, the event takes over the campus of Mira Costa High School with distinguished speakers, an expo featuring innovations from local student and community groups, and food from local restaurants and businesses. 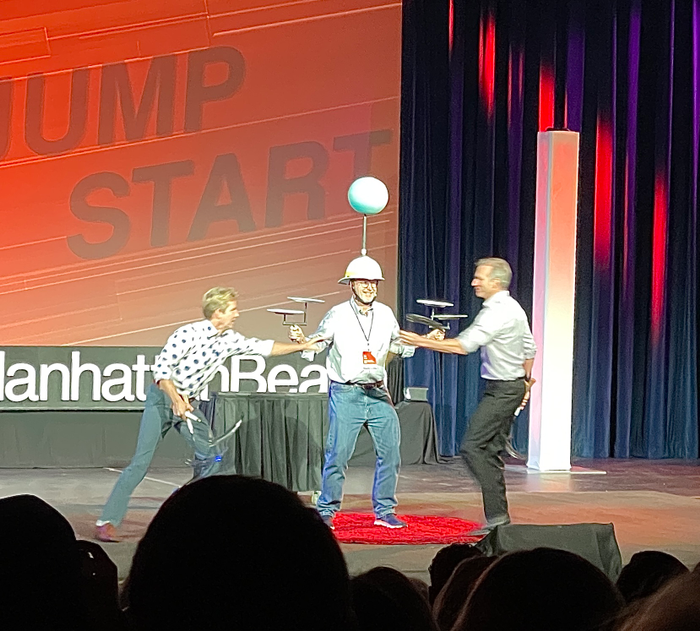 "The Passing Zone" juggling duo of John Wee and Owen Morse prepare to juggle scythes while an audience member holds his balance.
Did we also mention comedian jugglers tossing scythes to one another past a random audience member who spun plates in his hands and a ball on his head? Yes, there was that too.

TEDx speakers included Rob DeCou, an ultra-endurance athlete who became only the 7th person to finish the world's toughest ultramarathon, the Uberman, in 2020. The Uberman involves a 21-mile swim from Catalina to Palos Verdes, a 400-mile bike route that climbs 20,000 vertical feet before descending to Badwater basin, and then a 135-mile run through Death Valley and then up 13,000 feet to the trailhead at Mt. Whitney, the highest peak in the Continental United States.
DeCou described how he had faltered during the swim as ocean conditions worsened and an old injury flared up, so he stopped with four miles left to go. But he picked up the bike race and then did the run, defying near-death conditions in the process. As soon as he finished the run, he got permission from race officials to complete the swim from exactly where he dropped out so that he could get credit for finishing the race. Through his participation in the race, he raised $55,000 to combat human trafficking. "I choose to put myself through these tortuous trials of endurance because there are people who do not have the ability to make that choice," he said.
Featured speakers also included: 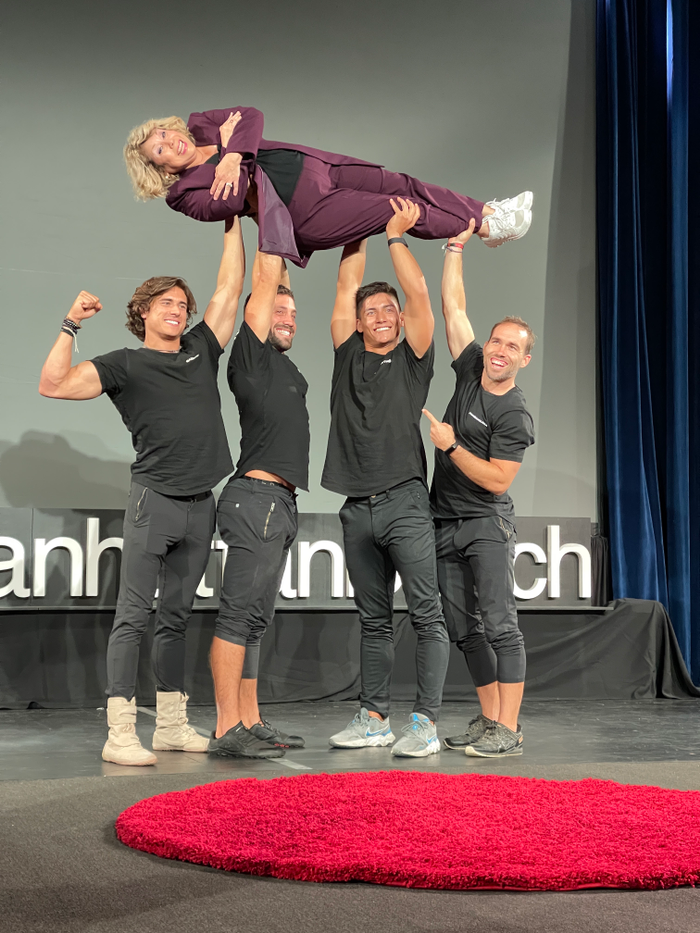 Deb Gutierrez gets "lifted" by the team from Positive Impact Movements after the show.

Surprise Guests Give Follow-Up from Past Appearances

In addition to new speakers, this year's TEDx Manhattan Beach brought back a few past speakers in a "what are they doing now?" sequence.
One of the highlights was a surprise visit from former speaker Thomas Suarez, who spoke in 2011 at age 12 when he was a Manhattan Beach Middle School student. In that 2011 talk, Suarez spoke about his work in developing apps - a talk that has since garnered more than 10 million views on YouTube. Suarez now leads Teleportal, a spatial computing company building 3D creator tools and dynamic object technology.
UCLA brain researcher Mary Helen Immordino-Yang followed up her 2012 TEDx Manhattan Beach talk on brain research with a look at what generates brain activity. Immordino-Yang, a professor of education, psychology, and neuroscience at the Brain and Creativity Institute and Rossier School of Education at USC, talked about studying the brain activity of inspiring teachers, and how her research was looking at ways to design schools so that students feel inspired by and deeply connected with what they are learning.
The event also featured a surprise appearance from one of the subjects of a former TEDx Manhattan Beach talk. In 2012, Court Crandall gave a TEDx talk on a documentary he made about eight Compton students vying for a $40,000 scholarship through a free-throw competition. The winner of the competition, Allen Guei, later learned that he had also earned a full ride to Cal State Northridge for basketball, so he decided to give the $40,000 to his other seven competitors instead. 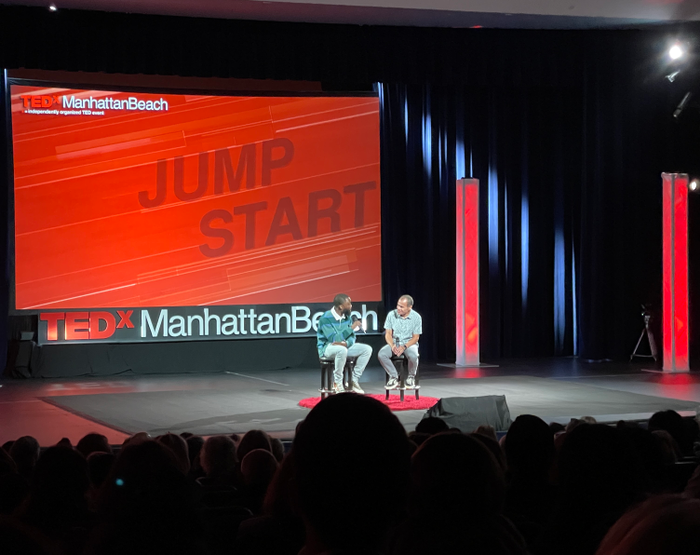 Allen Guei, in a surprise appearance, talks with host Paul Silva at TEDx Manhattan Beach.
After TEDx organizers played a taped interview with Crandall, out came Guei in a surprise appearance. Guei left his basketball career to help his mother when she was sick, and is now a personal trainer who trains professional basketball players.
"I don't regret [giving away the money] because at the time that I did it, it was the right thing to do," said Guei. "Yes, I could have kept the money, but that wasn't the way I was raised...It was a no-brainer for me to give the money away when I had the opportunity to help somebody." 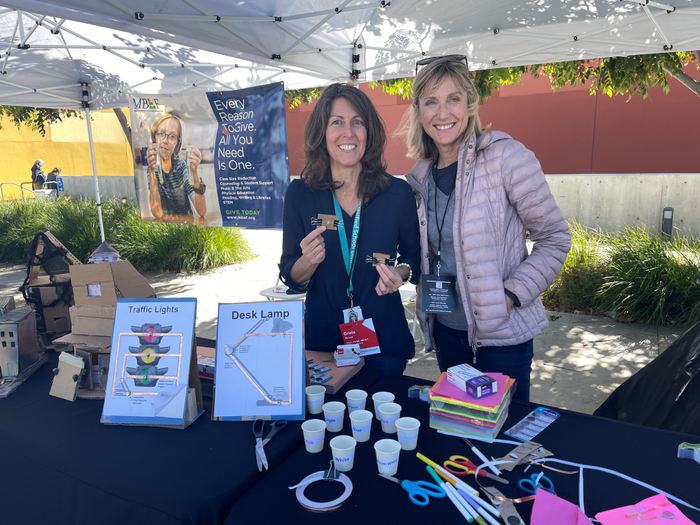 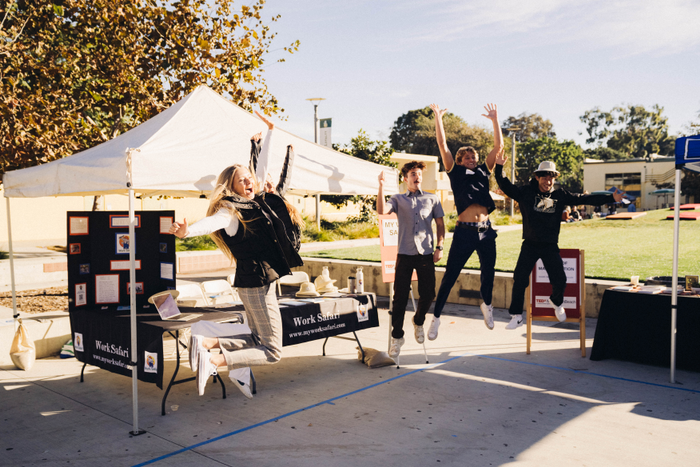 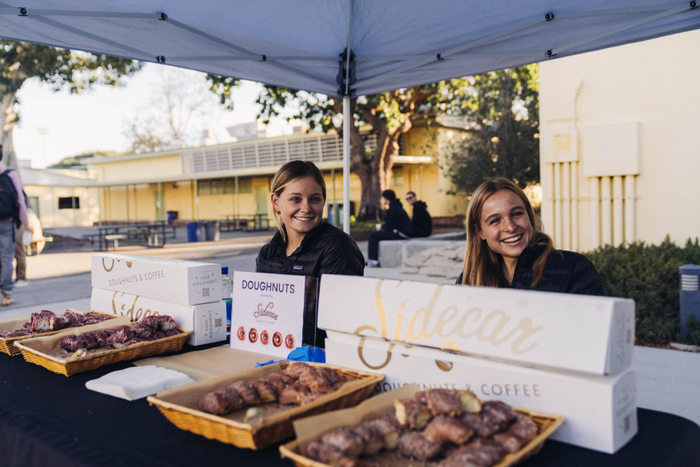 Next year's TEDx Manhattan Beach is tentatively set for November 4, 2023. The "Black in Mayberry" team offers a photoshoot opportunity at TEDx Manhattan Beach. TEDx Manhattan Beach speakers and staff gather after the event. Susie from Sound of Manifestation performs at TEDx Manhattan Beach.