UPDATE: LA County announced midday that there will be a late-Thursday update to countywide counts, approximately 4-5pm. MB News will share results as soon as they are available.
Want to know when we'll really know that this week's Manhattan Beach election results are solid?
Be patient. A Friday, Nov. 11, update could give greater shape to Election Day's overnight results. MB News will issue an alert as soon as new numbers come in that day. The county will issue twice-weekly updates thereafter, on Tuesdays and Fridays, through early December.

It was only two years ago that a Manhattan Beach city council race saw two finishers change positions as more votes were counted. Current city council member Joe Franklin started out more than 200 votes behind Grettel Fournell in the first counts, but later prevailed by 88 votes in the final count.

That memory is fresh, and perhaps a source of hope for trailing candidates, in particular for supporters of incumbent city council member Suzanne Hadley, who sat 653 votes behind David Lesser in the first major count this week. (See our recap of the counts for all races at the bottom of this story.) Hadley told supporters late Wednesday that it was "halftime" in the vote count.
Vote totals reported so far for Manhattan Beach represent less than 40% of all registered voters. County officials suggest that nearly all outstanding ballots are vote-by-mail ballots, including those returned at drop boxes and polling places on Election Day.

As candidates and voters look for a sense of finality to the local election results, speculation is rampant about just how many votes may be outstanding, and whether the complexion of those uncounted votes could be so different as to alter the outcome of any races.

The office of Los Angeles County Registrar-Recorder/County Clerk Dean C. Logan states that the county's overnight results, published at 3:35AM on Nov. 9 and not updated since, were to include three categories of votes:

3) Ballots cast at a Vote Center on Election Day.

Those results are considered by the clerk's office to be "semi-final." (See the PDF document at the bottom of this story for the clerk's summary of vote count reporting.)

In a news release Wednesday, Logan provided three categories of ballots yet to be tallied countywide, with the following preliminary (countywide) estimates for totals for each category:

Mail ballots included in Logan's estimate of outstanding votes were those "received through Election Day by the United States Postal Service or returned in person at a Ballot Drop Box or Vote Center." Logan also stated that more mail ballots would arrive over the next several days that would also need to be counted. Ballots arriving by Nov. 15 will be counted. 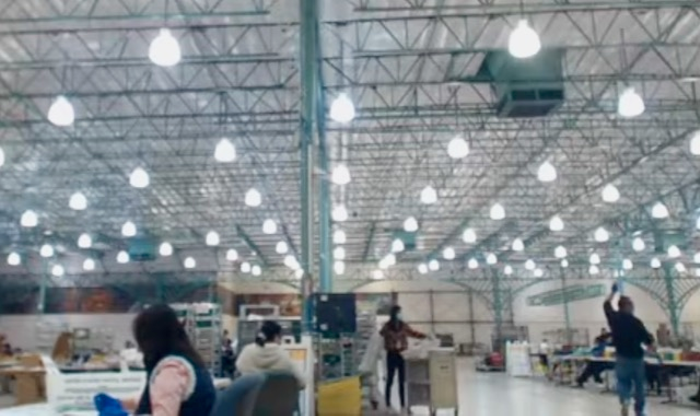 Is your ballot in here somewhere? Screenshot from the livestream at the L.A. County Vote By Mail Operations Center.

At the time of Logan's release, LA County had tabulated slightly more than 1.3 million votes, while announcing that slightly more than one million additional votes are still expected to be counted. By these figures, the county has so far published results on about 57% of the ballots expected.

How Many More MB Votes?

What could that 57% mean in Manhattan Beach?

If trends in our city were to be the same as countywide, there could be more than 7,400 Manhattan Beach ballots -- primarily vote-by-mail ballots -- outstanding and waiting to be counted.

Local political professionals dispute that possibility, suggesting to MB News that as few as 2,500-4,000 more votes may be pending to add to the current totals. The experience from 2020 would appear to support the lower end of that spectrum, as vote totals did not grow by much more than 15-20% after initial election-day counts.

The overnight count for Nov. 8 tallied just under 10,000 total votes in Manhattan Beach.

At issue while observers speculate about vote counts is where final voter turnout might end up.

Voter turnout in the June 2022 primary election (which featured the Measure A parcel tax) was 14,022, or 52% of registered voters.

The overnight count of Manhattan Beach votes accounted for only 37.1% of registered voters.

According to LA County elections officials, these results should include vote-by-mail ballots returned before Election Day and all ballots cast at a Vote Center through Election Day.

According to the Secretary of State's office, as of Oct. 19, 2022, voter registration in Manhattan Beach for this election totals 26,336 voters, with the top three affiliations being: