The latest ballot count from the November 8 election brought in more than 1,200 new ballots, although the leading candidates and results have not changed.

The new count adds 1,232 total votes to the count on both sides of Measure MB, the single race with the most total votes, 13,509.

That figure represents 51.3% of all registered voters in  Manhattan Beach. Vote counting continues through early December, with updates expected at least twice each week.

Once again with the latest results, all candidate races stayed essentially the same. New votes were added in the same general proportions as had been seen in the counts to date.

Incumbent council member Suzanne Hadley now trails second-place finisher David Lesser by 1,373 votes, slightly more than in the last reported count. After the overnight count on Election Night, Hadley had trailed by 653 votes. (There are two seats open in this race.)

In the school board race, where two blocs of three aligned candidates faced voters, the gap has also grown between third place and fourth place: 2,046 votes now separate third-place finisher Wysh Weinstein from fourth-place finisher Christy Barnes. (There are three seats open in this race.) 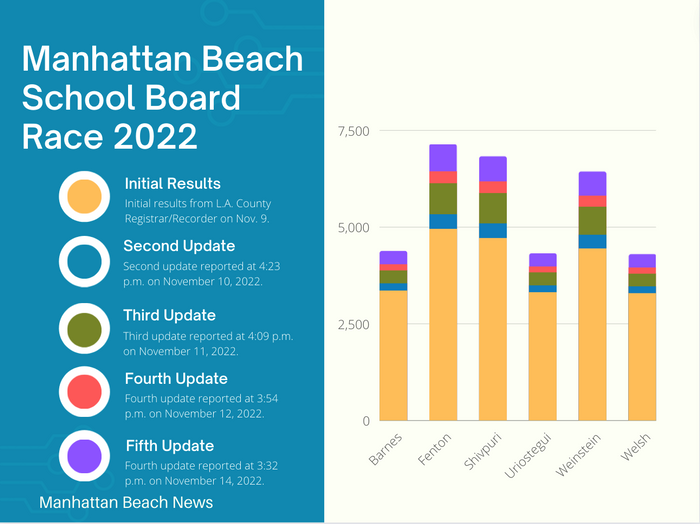