One week to the day after the Manhattan Beach midterm election, Los Angeles county issued another vote count update.

With this latest count, Manhattan Beach voter turnout now is confirmed to be higher than in the June 2022 primary election, when local voters weighed in on the Measure A parcel tax for education. At the June election, 13,607 voters cast ballots for and against Measure A. At this time, Measure MB (cannabis retail stores) has seen 14,217 votes counted (with 78% saying "no").
The total vote on Measure MB represents 54% of all registered voters in Manhattan Beach. Vote counting continues through early December, with updates expected at least twice each week.
The latest ballot count from the November 8 election adds 708 total votes to the count on both sides of Measure MB, the single race with the most total votes. Once again, none of the leading candidates' positions or results have changed. See all current results below.

Updated Counts Have All Been Similar in Proportions

Some elections in Los Angeles County have seen results change over the past week as more ballot counts were released, notably the Los Angeles city mayor's race between Karen Bass and Rick Caruso. Bass now leads after trailing in early results.

However, a week's worth of Manhattan Beach election updates has seen no major change in the proportion of votes going to various candidates.

In fact, candidates who led in the first Election Night overnight returns have received very slightly higher shares of the votes reported in updates after early last Wednesday morning. The following charts were created by MB News using data from updates received to date. 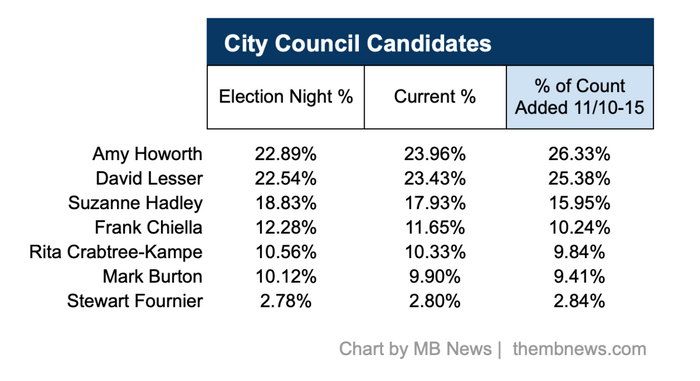 As shown in this chart, the two leading candidates for City Council, while holding between 23-24% of the total vote at this time, each have actually grown their vote shares by nearly a full percentage point as the counts have updated.

Amy Howorth has received 26.33% of the votes counted in updates issued after the Election Night overnight returns. Only she, second-place finisher David Lesser and last-place finisher Steward Fournier have received a greater proportion of votes in updates than they held in those first returns. All other candidates have under-performed their initial places slightly as more votes were counted. 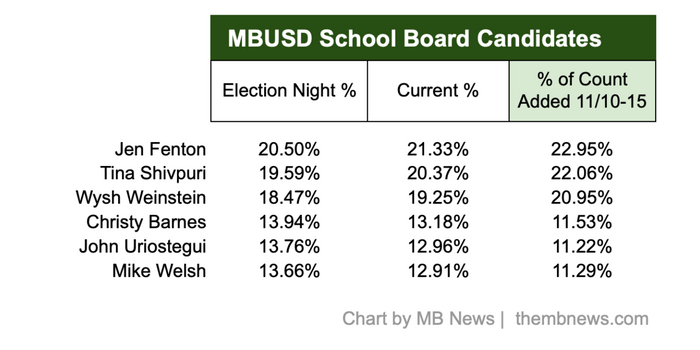 The dynamic in data for the school board race is similar to what is seen in the city council results. The top three candidates have seen their overall vote shares grow by roughly 0.8% over the first week. Their individual shares of votes reported in updates have been nearly 2.5% greater than their positions as of the Election Night overnight results.

The three trailing school board candidates have seen mirror-image results, with later-counted ballots coming in less favorably than the initial results, reducing their overall vote shares.

Incumbent council member Suzanne Hadley now trails second-place finisher David Lesser by more than double the amount she trailed by in the overnight count on Election Night. Hadley is now behind by 1,407 votes, having trailed by 653 votes last Wednesday morning. (There are two seats open in this race.)

In the school board race, where two blocs of three aligned candidates faced voters, the gap has also grown between third place and fourth place: 2,134 votes now separate third-place finisher Wysh Weinstein from fourth-place finisher Christy Barnes. (There are three seats open in this race.)