It's all over but the installations.

Manhattan Beach voters' selections for City Council and school board have been well-known for a month since Election Day, November 8. Even as thousands more votes were added to totals, no race meaningfully changed as vote counts were updated frequently. Now, the county registrar-recorder has certified final vote totals. 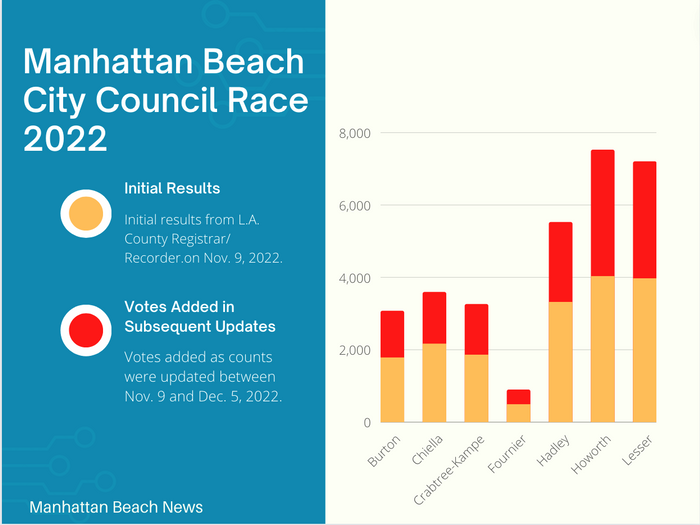 Newly (re)elected to City Council are Amy Howorth and David Lesser, each of whom previously served two terms on the council before taking a required 2-year period away. Howorth topped all council candidates with 7,518 votes, with Lesser close behind at 7,197. They will be installed on Tuesday, Dec. 13.

Incumbent city council member Suzanne Hadley had tried for a second term, but landed in third place in the race for two seats, ending 1,675 votes behind Lesser. 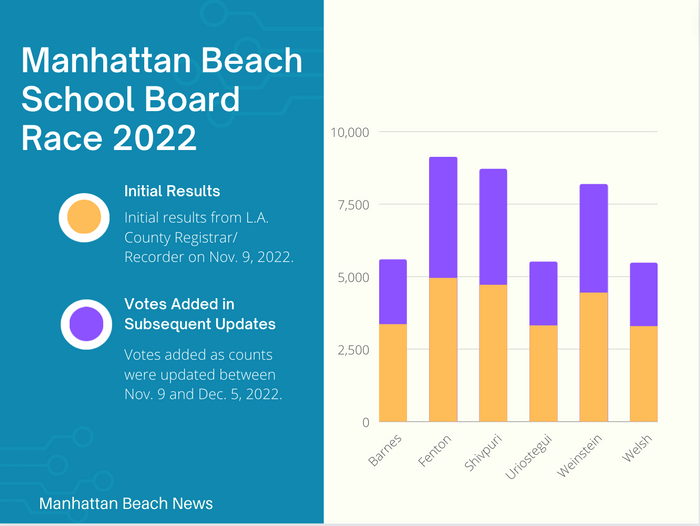 The top vote-getter for school board -- and among all citywide candidates -- was MBUSD trustee Jen Fenton, the only incumbent school board member to run this year. She was returned to the board with 9,130 votes. Two first-time candidates aligned with Fenton, Tina Shivpuri and Wysh Weinstein, took second and third place, and each will now join the school board.

Three candidates who ran as a group, arguing for major changes at the school board, all finished more than 3,500 votes behind Fenton. Christy Barnes, receiving the most votes out of that group with 5,575 total, actually got slightly more votes than outgoing city council member Hadley (5,522).

Meanwhile, voters made clear their comfort with the status quo regarding cannabis in Manhattan Beach. Back in November 2016, local voters had supported the statewide legalization measure, Prop. 64, with 61% support. That state measure expressly offered "local control" to communities to ban retail sales of marijuana.

This November, given the chance to open up Manhattan Beach to cannabis retail sales, voters adamantly said "no," with 77% going against Measure MB. A companion vote on Measure V, placed on the ballot by city council, drew 67.5% support for keeping local ordinances against cannabis sales as they are.

Voter Turnout Over Two-Thirds; Half of Votes Counted Well After Election Day

Final totals from the county currently show that 18,056 ballots were cast by Manhattan Beach voters, putting total voter turnout at 68.28%. (There were 26,444 voters on the rolls as of Election Day.)

Meantime, 17,387 votes came in for and against Measure MB, the one local race with the most ballots cast. This means 669 local voters returned ballots but did not vote on the measure. There was somewhat greater dropoff in the multi-candidate city council and school board races, where not all voters used the 2 votes they had for council or their 3 votes for schools.

This year's voting totals are far higher than were seen in an arguably comparable midterm election in November 2014. Then, as with this year, there was a non-competitive race for governor, as a first-term Democratic governor sought re-election. In 2014, just 11,911 voters cast ballots, representing 47.9% of all those registered. This year's totals were over 20 percentage points higher.

The vast majority of Manhattan Beach voters used their mail ballots instead of voting in person. A total of 3,085 votes, just 11.7% of registered voters and 17.1% of those voting, were cast at "precincts," meaning at in-person voting centers. (Manhattan Beach voters could appear at any county vote center to cast a vote in person.)

That means 14,971 local voters used their mail ballots (82.9%), returning them by mail, at drop boxes or at polling places. Processing of mail ballots, which requires signature validation, among other checks, tends to be somewhat slow, which is one reason that several thousand votes were added to totals well after election day.

In the final totals, it is now clear that the first overnight counts showed 54.1% of the total votes that were eventually counted, and 8,285 more votes were eventually tallied after that report in the wee hours of Nov. 9. The protracted count surprised many election observers, who were not accustomed to seeing such large shares of the vote come in late. Even in the high-turnout election of November 2020, far more local votes were processed and counted soon after the election.

MB News projections as to turnout were largely correct. In our first report of results the day after the election, MB News estimated that we were then seeing only 50-55% of the totals to be expected. In fact we had 54.1% of the count at that time.

Soon after, we projected that there could be 7,400 or more votes outstanding. Final numbers show that MB News slightly underestimated the number of votes outstanding at the time, even while local political pros were telling us that our estimates were high (most expected 2,500-4,000 more votes, not 8,000).

Here are the latest updated counts of Manhattan Beach votes for City Council and school board, from the L.A. County Registrar/Recorder. On Dec. 5, the registrar/recorder certified these results.

- LA County has updated its total of voters registered in Manhattan Beach for this election to 26,444, just about 100 above totals supplied previously.

According to the Secretary of State's office, as of Oct. 19, 2022, voter registration in Manhattan Beach for this election totaled 26,336 voters, with the top three affiliations being:

Election Day data showed a tiny increase in the number of registered voters to 26,444, but the county has not yet provided party breakdowns for that final figure.