Manhattan Beach's oldest church is currently home to Manhattan Beach's newest pastor... who is seeking ways to reach out and unite the community during divisive times.
Rev. Mike Spitters, who came to Manhattan Beach Community Church at the end of the summer, is looking to continue and expand the church's tradition of serving the community and bringing different faith groups together.
"This church has always been about serving the community and finding ways to unite the community," he said. "If there's ever been a time when [all faiths] need to come together and see what unites us rather than what divides us, that time is now."
Spitters will join MB United along with his counterparts at Congregation Tikvat Jacob and Trinity Lutheran Church in co-sponsoring a community "Celebration of Peace" event on Monday night.

Spitters is a third-generation pastor who has led congregations in small, medium, and mega-sized churches in rural, suburban, and downtown areas in Michigan, California, and Texas.
He arrived in Manhattan Beach in late August to a "trial by fire," or rather ice water, as he learned that on one of his first days in Manhattan Beach he had been "volunteered" to serve in a dunk tank at a church festival.
The dunk tank wasn't working properly, so organizers decided that kids could instead earn the right to dump ice-cold water on him. "I was 'immersed' from Day One," he said with a grin.
Manhattan Beach Community Church has always had a group of a few hundred families, but, as in many faith communities, those numbers fell off during the pandemic while in-person services and activities were put on hold.
Spitters is hoping to bring more families back, and more people involved, by emphasizing community-based activities and ways to serve.
During a busy fall season, he joined the MBCC crew making Pepperbellies at the Manhattan Beach Hometown Fair, hosted an evening of jazz "under the stars" with professional musicians and a dance floor, cheered on the P.I.E.R. Group parishioners at the Manhattan Beach 10K, and joined this year's Leadership Manhattan Beach class.
And when he learned about the Skechers Friendship Walk, he told parishioners that if they had a choice, he would urge them to go do the walk rather than come to services that morning. The MBCC team went on to raise more than $1,000.
"It's really about being 'the church' in the community," he said. "Everywhere you turn, our people are staying connected."
Parishioner Amy McIntyre said that in just three and a half months, Spitters has made it a point to get to know as many people as possible.
"He encourages and supports people’s passions and projects," she said. "And through all of these various efforts, the most important thing is that he connects with the people he’s meeting and interacting with. We are truly blessed and have a bright future ahead with Pastor Mike as our senior minister."

Spitters has continued MBCC's efforts to be involved in a number of interfaith experiences. When he first arrived, he hosted the Pacifica group, who shared a traditional Muslim "Noah's pudding" recipe with the congregation. MBCC joined again with the Pacifica group to share an interfaith Thanksgiving meal.
He was also part of a group that welcomed members of Congregation Tikvat Jacob on their High Holy Day services held at American Martyrs Church's O'Donnell Hall (a space large enough to fit all congregation members). 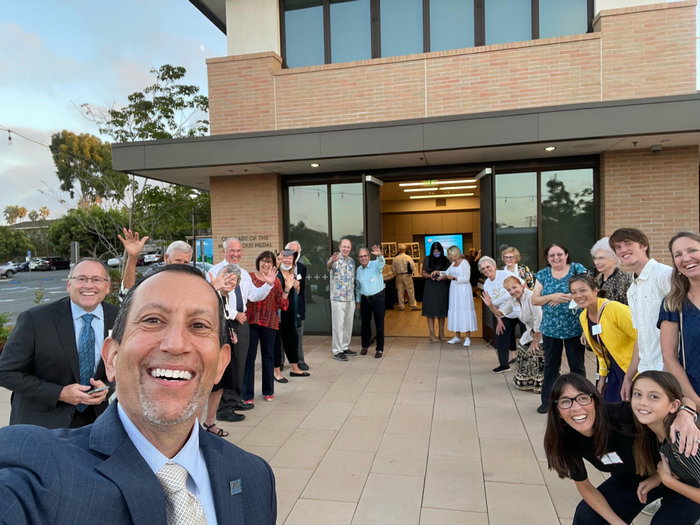 (Rabbi Joshua Kalev took this selfie with members of MBCC outside American Martyrs' O'Donnell Hall at their Yom Kippur services; Spitters is on the left.)
"Our friends from MBCC, led by Pastor Spitters, came to our Yom Kippur services to greet our members as they walked in to let them know that they support us during this rise in antisemitism," said Rabbi Joshua Kalev of Congregation Tikvat Jacob.
Kalev continued: "This amazing tradition started years ago when the Tree of Life synagogue shooting happened, and MBCC came to our services soon after to support us. I can’t tell you the feeling of love, and warmth it brings to our members as they are entering services on the holiest day of the Jewish year. It was pretty special to have a Jewish community be welcomed by a Protestant church at services being held in a Catholic Church."
Those interfaith connections are key at a time when there has been a rise in hate crimes in Manhattan Beach. (MBCC has been hit with graffiti twice in the last three months, noted Spitters.)
It is also why Spitters is proud to participate in Monday night's peace event that unites groups from different faiths.
"We're looking at core values that all groups share, and we're focusing on the concept of peace, which is something that we all universally desire," he said. "My hope is that people will come away with a greater sense of what unites us, rather than what divides us, during this holiday season."
Rabbi Kalev concurred. "So often everyone focuses on their own holiday - I am totally guilty of that - and we want to highlight the universal themes and values that Hanukkah, Christmas, etc. all share - and there are so many," he said. "On a personal level, I can say that nothing gives me more hope, courage and strength as the Jewish community faces a large spike in antisemitism than bringing the greater community together to know we are not alone. "

Manhattan Beach Community Church is the oldest church in Manhattan Beach; and in fact, it's older than Manhattan Beach itself.
Its original building was constructed in 1906 at the corner of 9th and Highland and went by the name of Manhattan Congregational Church. Following an earthquake in 1933, the congregation built a new and larger church at the same location. (The structure is now private residences.) 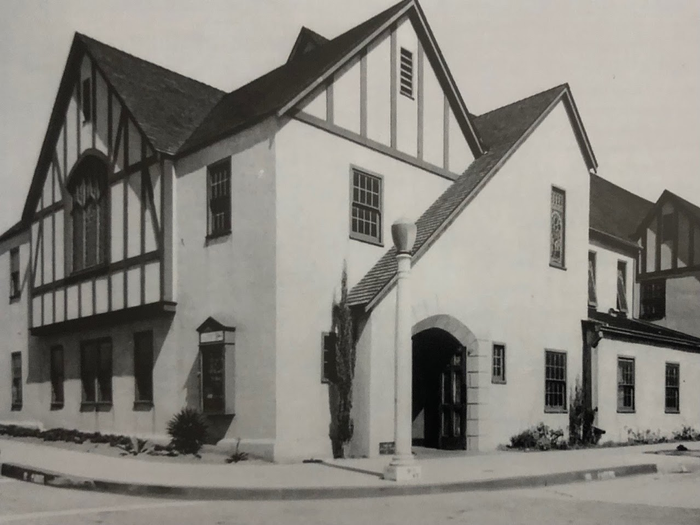 In 1957, newly joined with the United Church of Christ, the congregation moved to its current location at 303 S. Peck Avenue, just north of Mira Costa High School. The church's original stained glass window and church bell were preserved and can be seen at the Peck location.

One unique aspect of the church is its community theater, which is the longest-running theater in the South Bay. Prominently displayed on a plaque outside the theater is a list of the 86 productions that have been held there since 1956. 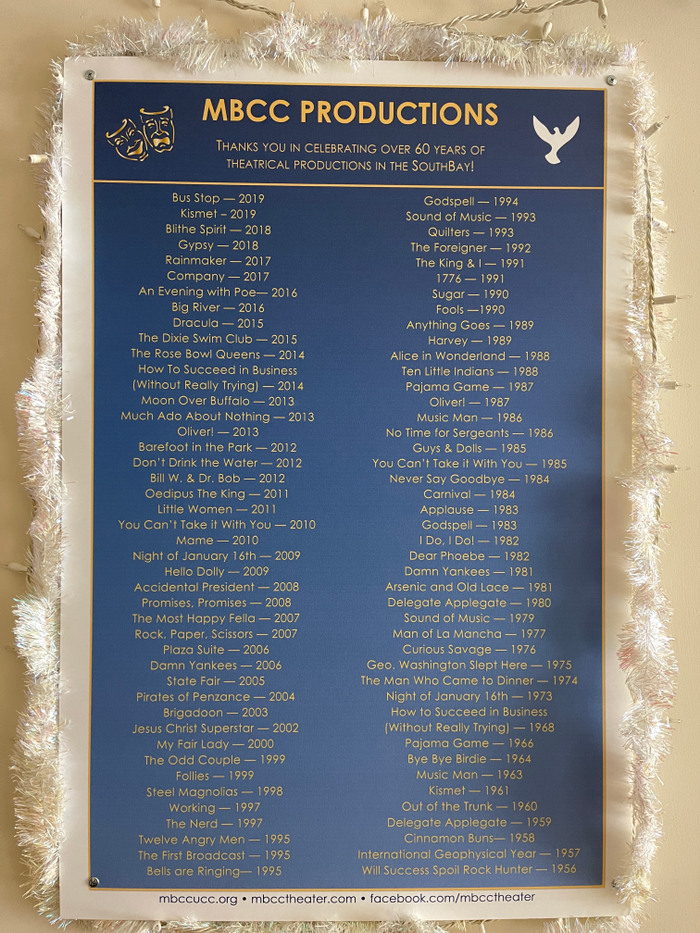 The productions, which were on hold during the pandemic, have now returned, as spirited as ever.

In fact, those who attended Saturday night's Christmas show at the MBCC theater got a chance to "boo" Spitters as he gamely played the evil villain Mortimer Whiplash in the one-act play "The Old Cookie Shop." 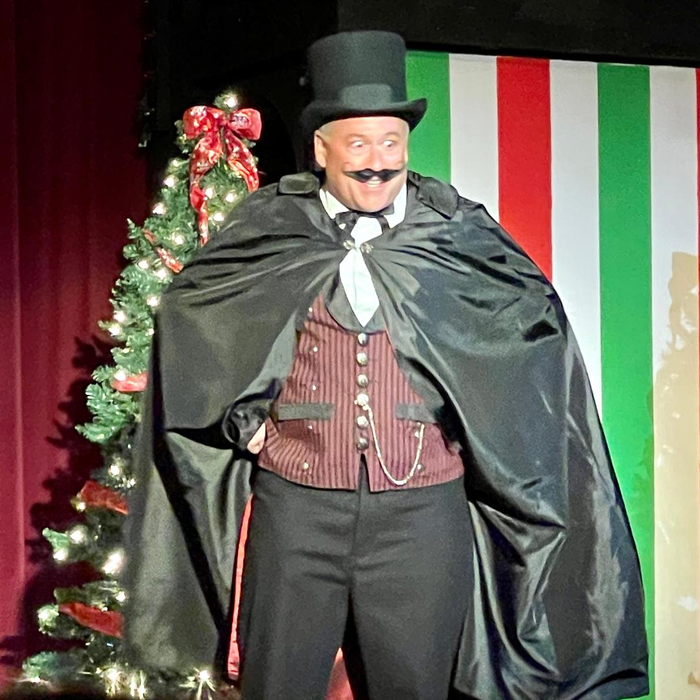 The MBCC Theater will present Neil Simon's "Little Me" this spring; and of course, the community is welcome.