New Bruce's Beach Plaque Will Go In, Without Garden, For Now The Manhattan Beach City Council has voted to move ahead with the installation of a long-planned new plaque at Bruce's Beach Park facing Highland Ave. A garden and future art project will come later.
The council made the decision to move ahead with the plaque last week, after members evaluated potential designs for a "meditation garden" that will surround the plaque.
Members agreed to wait on finalizing the garden design to make sure it fits in with the future (not yet designed or approved) art project, but to move ahead "as soon as possible" with the plaque installation.
The plaque has been completed and has been waiting in city storage.
The bottom of the plaque reads, "Dedicated 2022." An original plan had been to install it on June 19, 2022 (the "Juneteenth" holiday), but various delays kept pushing the project back.
To ensure that there are no further delays, the city is not planning to change the date on the plaque, a city spokesperson told MB News on Monday.
The new plaque will replace an earlier plaque that stood in that location. The new plaque language, which was approved by the City Council in March, explains more of the Bruce's Beach history.
There will be a stand next to the plaque with a QR code linking to the full Bruce's Beach history report on the city website.
The city's plaque (at Bruce's Beach Park on Highland Ave.) is not to be confused with a second, different plaque created by Los Angeles County. The county's plaque has already been installed on the Strand in front of the lifeguard training facility property that was once owned by the Bruce family. 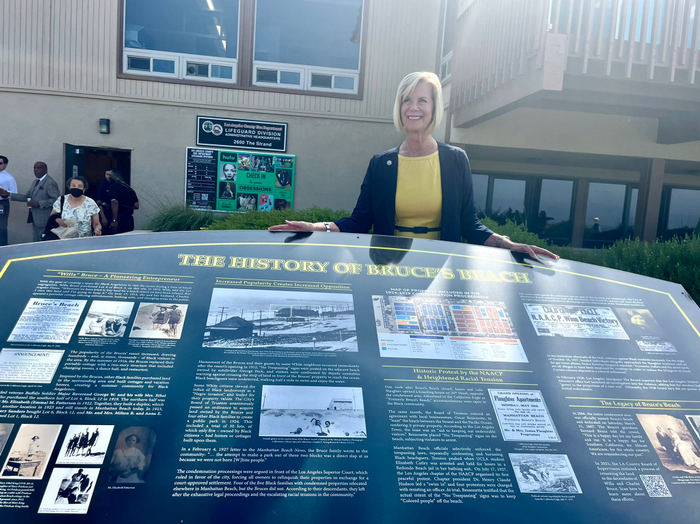 L.A. County Supervisor with the county's Bruce's Beach plaque located on the Strand in Manhattan Beach. Photo via Janice Hahn.

Meanwhile, within Manhattan Beach, it was not until 2006 that the city publicly acknowledged this chapter of its history by naming the area east of the beachfront property Bruce's Beach Park and establishing a plaque in that (park) location. In the summer of 2020, a movement began growing for the city to take further action to recognize the Bruces.
Despite creating a Bruce's Beach Task Force and adopting a history report created by the task force, the Manhattan Beach City Council struggled for nearly a year with finding compromise on the wording, location, and style for a new marker honoring Bruce's Beach and the Bruce family.
The City Council approved the plaque language on March 10, 2022 and the plaque design on April 19, 2022.
Also in March 2022, the City Council reaffirmed its policy disallowing special event permits at Bruce's Beach Park, going against a recommendation of the city's Parks and Rec Commission. Councilmembers voted 4-1 to uphold the current special events policy that excludes Bruce's Beach as well as Larsson Parkette and 8th Street Parkette from the permitting process.
Although a "Juneteenth" celebration in 2021 had brought large crowds to Bruce's Beach, Juneteenth 2022 was a relatively quiet day at Bruce's Beach Park, with just a scattering of families enjoying picnics and with city-contracted security staff on hand.