If it's December, and you suddenly encounter flashing police lights as well as a loud horn honking out "Jingle Bells," it can only mean one thing: The Manhattan Beach Santa Float has arrived on your block.
The float, run by the Manhattan Beach Kiwanis Club, is a cherished local tradition dating back to 1955. 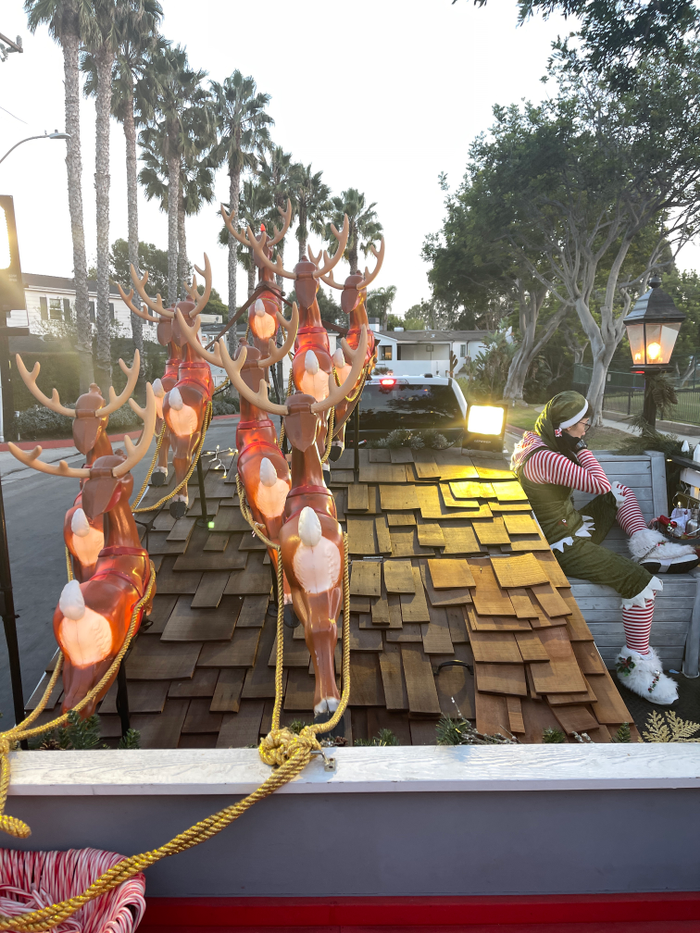 (The view from the "hot seat" behind the reins of the Santa float.)

The float travels up and down the streets of Manhattan Beach for three weeks every December, bringing treats, good cheer, and photo ops with Santa.

Santa and his elves wait patiently on each block as children and adults (and their dogs!) line up to get their (free) picture taken, share their holiday wishes, and get a candy cane.
It's a massive operation that relies on teams of volunteers and coordinators. And it's such a beloved tradition that many neighborhoods turn "Santa float night" into the biggest block party of the year.
To learn more about the people, traditions, and behind-the-scenes efforts to make the Santa float run, Manhattan Beach News spent Tuesday night out on the town with the float. 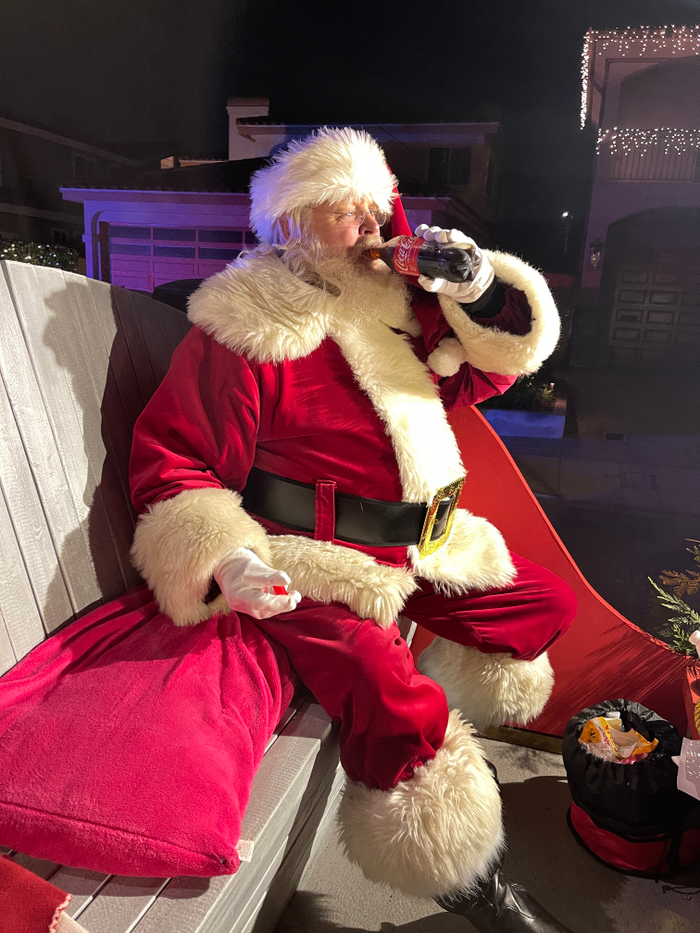 (Santa enjoys a Coca-Cola, of course)

What did we learn? For starters, Santa brings along his own eclectic Christmas playlist; he's heard just about every possible Christmas wish; and he packs an ice-cold Coca-Cola for the ride. (But you probably already knew that).

The Santa float has been around in Manhattan Beach for nearly three-quarters of a century.
It began around 1955 (records aren't exactly clear), inspired by a similar effort by the city of Anaheim to entice people to move to town, according to head Santa float volunteer Steven Carvel of the Kiwanis Club.
Longtime resident Elizabeth Porter remembered those early days. She told MB News, "I'm 61, and I remember coming to see the float when I was a kid." Her mother, who accompanied her to the float this year, agreed. "They used to blare loud gospel music - You could hear it from three blocks away."
Since then, the float has passed back and forth between the Soroptomists of Manhattan Beach, the Manhattan Beach Chamber of Commerce, and the Kiwanis Club.  For a while it was a joint effort between Soroptomists and Kiwanis, then it was fully turned over to the Kiwanis Club in 2015.
In 2017, Carvel, who was also part of the Leadership Manhattan Beach class that year, brought up the idea of refurbishing the falling-apart float as the group's class project. The Leadership Manhattan Beach group heartily agreed, and went on to raise $76,000 to completely overhaul the float - and build it a permanent shed, where it is kept in the city storage yard.
The Kiwanis Club also worked with the Manhattan Beach Unified School District in 2018 to assess how to map out the routes so as to reach the most young children. 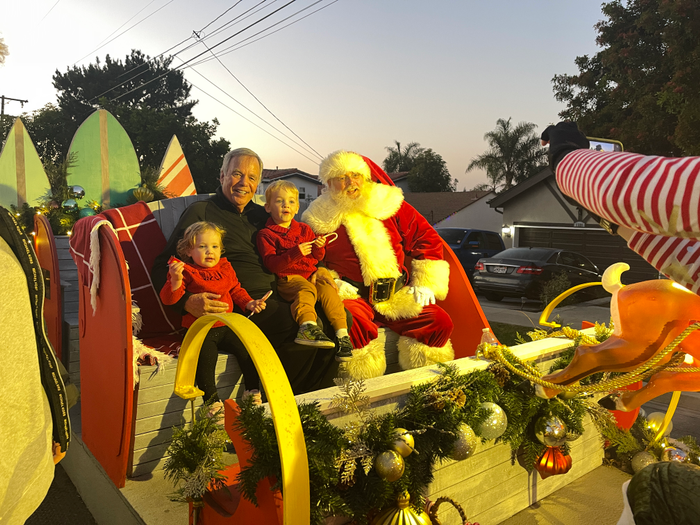 (Mark Burton, who was a member of the Leadership Manhattan Beach Class of 2017 that helped refurbish the float, enjoys a visit to see Santa with his grandkids.)
Now, on 15 nights of the year, the Santa float travels around town, driven by a truck and driver donated by Kinecta Federal Credit Union, and flanked at either end by volunteers from the police auxiliary led by Santa float veteran Paul Curry.
Each night Santa also gets assistance from a team of "elves" - representatives from different community groups or organizations - who help herd people and pets on and off the float. (On Tuesday night, the governing board of the Manhattan Beach Hometown Fair served as that night's helpers.) 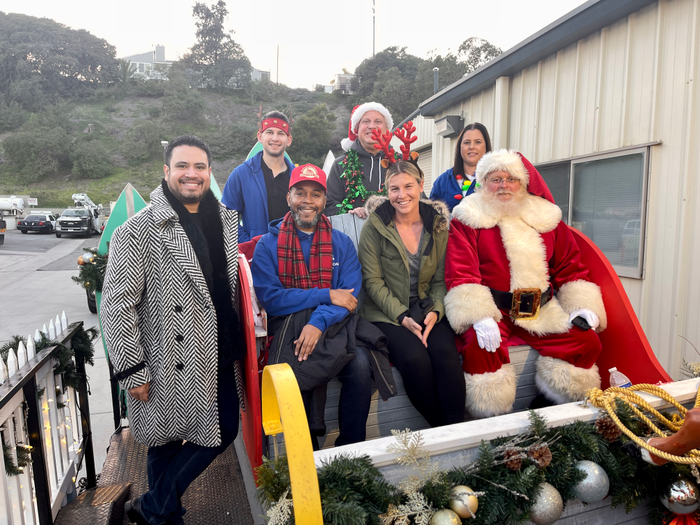 (Members of the Manhattan Beach Hometown Fair board prepare for a night as "elves" on board the Santa float.)
All told, Carvel and Curry put in about 150 volunteer hours every season; the police volunteers put in about 400 total volunteer hours, and the entire effort (counting the help of the elf teams) represents about 1,500 volunteer hours.
"Paul and I might be the leads, but we could not do it without the entire army of volunteers that make it possible," said Carvel. "We call it the 'Santa army.'"

A Night on the Town

When the Santa hits the streets, he's greeted with cheers and applause from kids young and old.
The volunteer officers, led by Curry, scope out the block ahead of time, and in some cases help get the kids organized before Santa pulls up.
Santa fans ranging from tiny tots to octogenarians wait their turn to board the float for a picture and an opportunity to tell Santa their wishes. On each block, the float crew will wait until all Santa fans get their time.
(When a parent ran from one block over to check to see if there was "a certain time" the float would arrive on her block, Curry gestured to the line of kids in front of him and quipped, "It depends on how long these kids' lists are.") 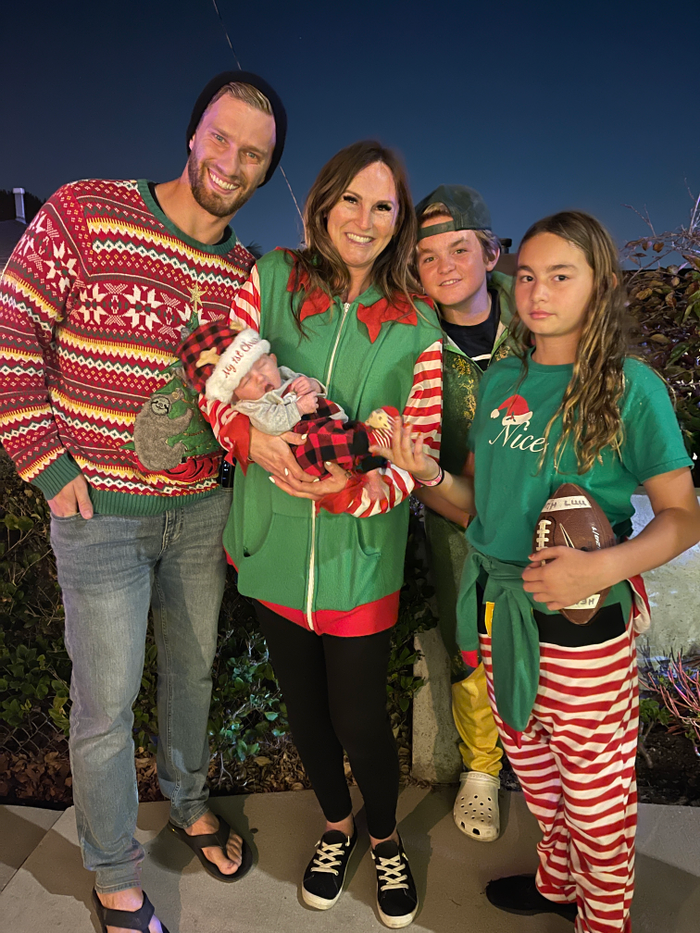 On Tuesday night, Santa's youngest visitor was a tiny two-week-old baby. The baby belonged to Trevi O'Neill, whose family was pictured in MB News for winning the "Most Scary" award at the Halloween golf cart parade. At the Halloween parade, O'Neill had dressed up with a "demon" baby doll poking out of the t-shirt that was stretched over her pregnant-at-the-time belly. This time, her real-life baby was dressed up in tiny Christmas clothing for her first visit with Santa.

On many blocks, families set up tables full of cookies and hot chocolate to offer Santa. On Tuesday, one young Santa fan ran breathlessly up a hill to reach the Santa Float to let them know not to miss her family's cookie stand on the next block. (She was rewarded with a ride on the Santa Float back down the hill to her house.)
Other blocks go all-out for a party celebrating Santa's arrival. On 5th Street, Brendan Beirne's house is the place to be on Santa float night - with families gathering around large tables and a fire pit to enjoy music, food, and drink. 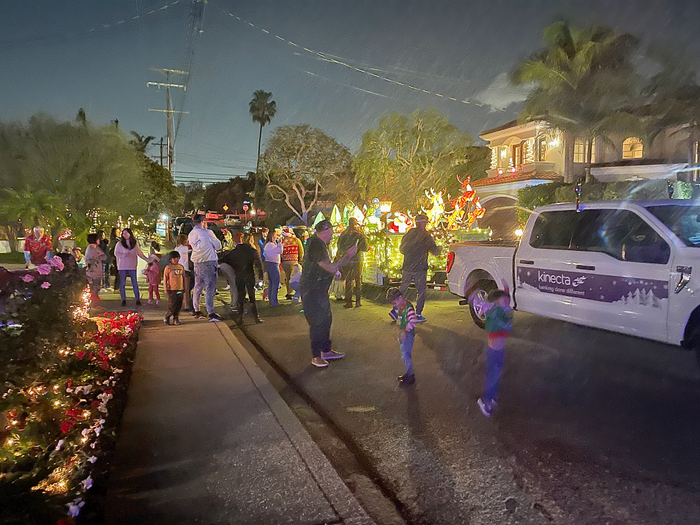 (Families line up to meet Santa while kids play in the "snow" from the snow machine.)
Beirne, who owns a landscaping company, reached out to his sources to research the best "snow" machine on the market. Now, each year on the Santa Float night, he affixes his snow machine to a light post, where it pumps out light and fluffy soap suds to the delight of all of the children on the street.
"It's a great way to get neighbors together," said Beirne. 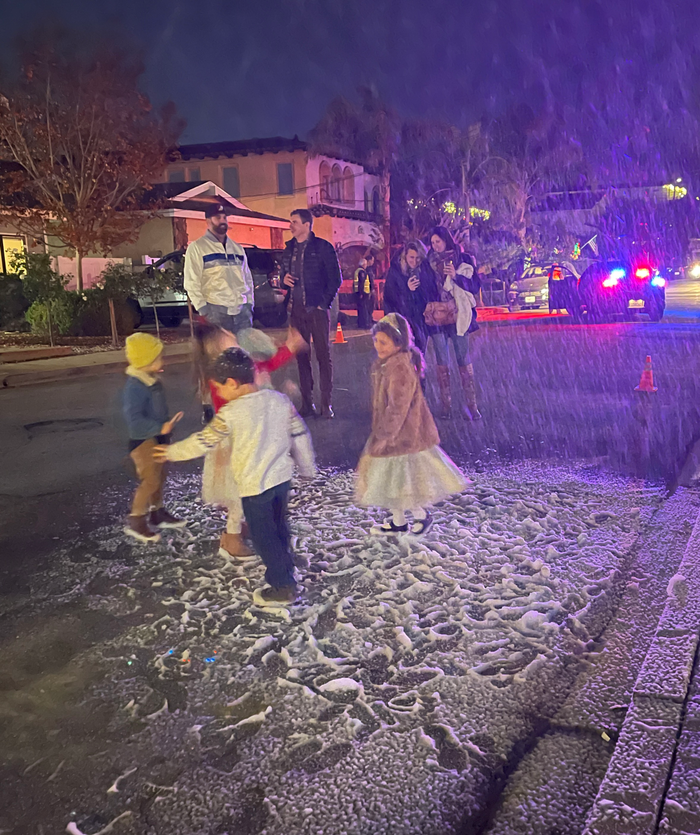 (Kids dancing in the "snowstorm" at a Santa float party.)
With so many large groups of kids gathered together, the Santa Float volunteers also took the opportunity to do a little civic duty this year: They handed out e-bike safety door hangers from the city's Ride Safe, Ride Ready safety program. 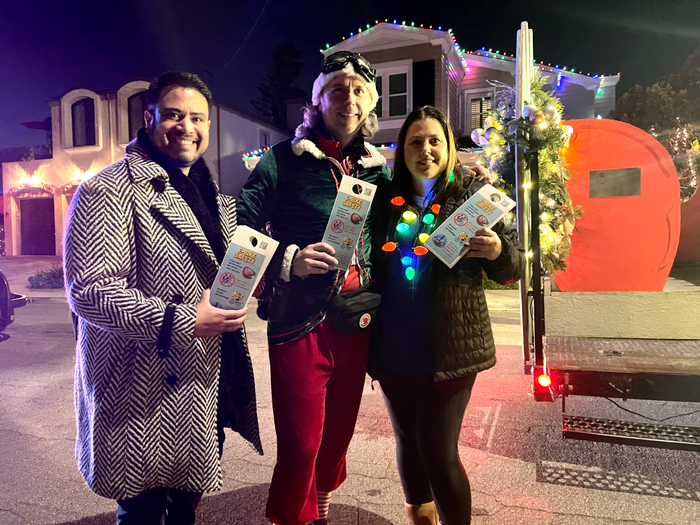 The Show Must Go On

For such a complicated operation with so many moving parts, the team must hit some snags, right? Not exactly. The team has been doing this for so long they know exactly how to get past just about any obstacle.
For instance, the team knows ahead of time about the two or three Manhattan Beach streets that are just too narrow (with parked cars) for the float to get through. They know precisely where to park at the end of the block, and they have the team ready to round up the kids at the other end of the street.
They also know exactly how many candy canes to have on hand. In fact, Carvel begins scouting around stores for the candy canes as early as September to make sure there are enough to last through the float season. (Santa only gives away "the very best candy canes," said Carvel, referring to the classic 7 1/2-inch Spangler candy canes.) 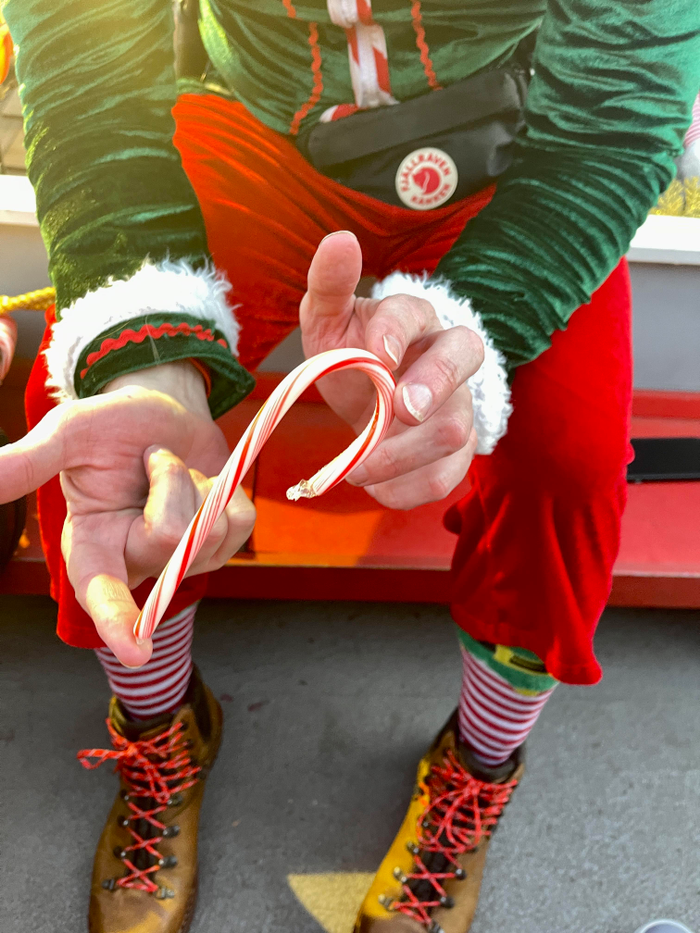 (The Santa float gives out "only the best" candy canes, according to its elves. )
So if you happen to be looking for those specific candy canes and the stores are all sold out, you can blame the Santa float: They give out approximately 4,000 candy canes each year. (The elves on the float are known to enjoy the canes as well.)
Santa is also ready to handle difficult and even heartbreaking requests, such as a child asking for his or her parents to get back together, or a special request from someone facing end-of-life issues. 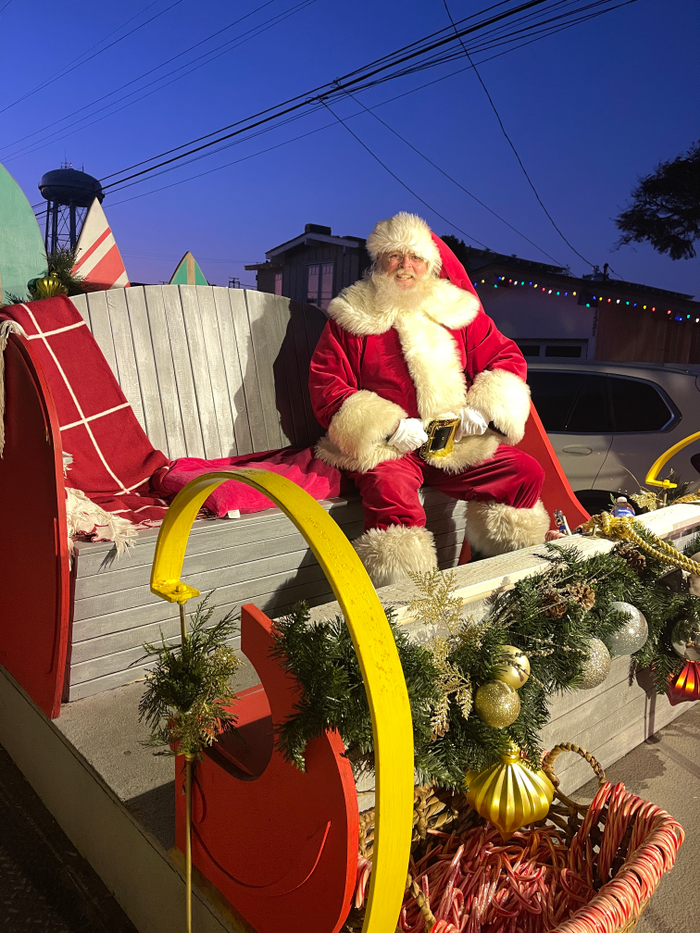 (Santa is prepared to answer all of your questions)

And sometimes Santa even gets tough personal questions ("Where were you born?" "What's your wife's name? "How did your meet her?") but he's prepared to answer just about anything.

This year, the lights on the float are powered by a solar generator, which has about four hours of life. On Tuesday night, that was almost exactly enough to make it through each night of rounds, as the generator turned off at the last stop. (There's also a backup generator in case they need more time.)

The team also runs a "Santa tracker," which allows families to check in online to see where Santa is along his route on any given night. But that means that the person operating the Santa tracker from his or her phone has to remember to turn it off when the rounds are done.

One time, said Carvel, the person in charge of holding the Santa tracker forgot to turn it off and then went home and took the dogs for a walk - much to the surprise of anyone who was still tracking Santa that night.

Don't miss the Santa Float on your block (or if you miss it, check it out another night in a different neighborhood). You can see the full route schedule here.